Rigged: How the Media, Big Tech, and the Democrats Seized Our Elections (Paperback) 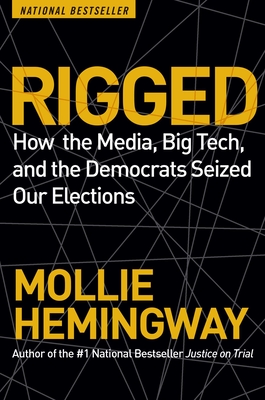 Rigged: How the Media, Big Tech, and the Democrats Seized Our Elections (Paperback)


Special Order—Subject to Availability
Author of #1 national bestseller Justice on Trial and Fox News analyst Mollie Hemingway convincingly demonstrates how Trump-addled Democratic Party operatives rigged the 2020 presidential election through a combination of legal subterfuge, the wholesale buying of statewide elections using monetary contributions from a handful of billionaires and their cronies, and the countrywide scamming of the American election process by wielding the pandemic as a political cudgel.

Stunned by the turbulence of the 2020 election, millions of Americans are asking the forbidden question: what really happened?

It was a devastating triple punch. Capping their four-year campaign to destroy the Trump presidency, the media portrayed a Democratic victory as necessary and inevitable. Big Tech, wielding unprecedented powers, vaporized dissent and erased damning reports about the Biden family's corruption. And Democratic operatives, exploiting a public health crisis, shamelessly manipulated the voting process itself. Silenced and subjected, the American people lost their faith in the system.

RIGGED is the definitive account of the 2020 election. Based on Mollie Hemingway's exclusive interviews with campaign officials, reporters, Supreme Court justices, and President Trump himself, it exposes the fraud and cynicism behind the Democrats' historic power-grab.

Rewriting history is a specialty of the radical left, now in control of America's political and cultural heights. But they will have to contend with the determination, insight, and eloquence of Mollie Hemingway. RIGGED is a reminder for weary patriots that truth is still the most powerful weapon. The stakes for our democracy have never been higher.
Mollie Hemingway, one of America's most respected journalists, is a senior editor at The Federalist, a contributor to Fox News, and the co-author of the #1 national bestseller Justice on Trial: The Kavanaugh Confirmation and the Future of the Supreme Court. Her work has appeared in the Wall Street Journal, USA Today, the Washington Post, and many other outlets.