Diamonds in the Marsh: A Natural History of the Diamondback Terrapin (Paperback) 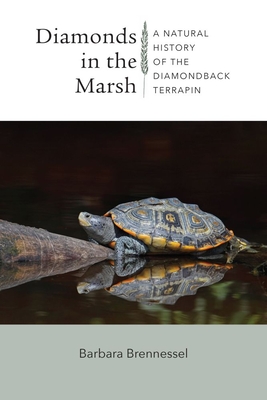 Diamonds in the Marsh: A Natural History of the Diamondback Terrapin (Paperback)


Not On Our Shelves—Ships in 1-5 Days
A new edition of a classic on a beloved turtle species.

She’s the mascot for the University of Maryland’s sports teams and her ancestors were nearly driven to extinction by Victorians who indulged in turtle soup. But as she buries herself in the mud every night to sleep, the diamondback terrapin knows none of this. The size of a dinner plate and named for the beautiful concentric rings on her shell, she can live at least forty years and is the only turtle in North America who can live in brackish and salty waters. Several diamondback populations have been the subjects of ecological studies in recent years, but most of that information was buried in scientific literature and various state and federal reports—until this book.

Synthesizing all known research on this remarkable animal, Diamonds in the Marsh is the first full-scale natural history of the diamondback terrapin. Focusing on the northern diamondback, Barbara Brennessel examines its evolution, physiology, adaptations, behavior, growth patterns, life span, genetic diversity, land use, reproduction, and early years. She also discusses its relationship to humans, first as an important food source from colonial times through the nineteenth century, and more recently as a cultural icon, frequently depicted in Native American art and design. She concludes with a look at contemporary hazards to the terrapin and urges continued study of this marvelous creature. Updated with a new introduction by Brennessel, and with a foreword by Bob Prescott, former executive director of Massachusett’s Audubon Wellfleet Bay Sanctuary, Diamonds of the Marsh is perfect for those interested in the conservation of a species.
Barbara Brennessel is professor emerita of biology at Wheaton College (MA) and has served on the Shellfish Advisory Board in Wellfleet, MA. She is the author of Good Tidings: The History and Ecology of Shellfish Aquaculture in the Northeast.

“Environmentalists, ecologists, and marine biologists will delight in this meticulously detailed but highly readable look at the only North American turtle species that can tolerate the ‘fresh water, salt water, and everything in between.’”
— Publishers Weekly

"A serious treatment of the natural history of one of the most beloved creatures of the Eastern Seaboard. . . well illustrated with photographs."
— Natural New England Magazine

"A comprehensive natural history such as Diamonds in the Marsh is an invaluable tool in the study and conservation of a species, and can provide a solid foundation for future research, conservation, and management decisions. Brennessel effectively pulls together the bulk of literature on the diamondback and communicates it to the reader in a generally clear, uncluttered fashion so as to make it not only a resource for researchers, but also an interesting read for reptile aficionados."
— Herpetological Review