The Journalist: Life and Loss in America's Secret War (Paperback) 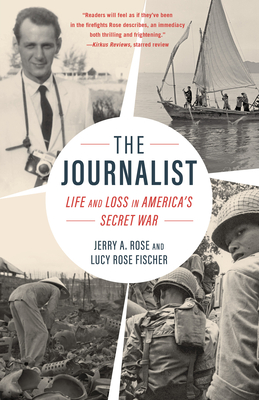 The Journalist: Life and Loss in America's Secret War (Paperback)

By Jerry A. Rose, Rose Fischer

Jerry Rose, a young journalist and photographer in Vietnam, exposed the secret beginnings of America's Vietnam War in the early 1960s. Putting his life in danger, he interviewed Vietnamese villagers in a countryside riddled by a war of terror and intimidation and embedded himself with soldiers on the ground, experiences that he distilled into the first major article to be written about American troops fighting in Vietnam. His writing was acclaimed as "war reporting that ranks with the best of Ernest Hemingway and Ernie Pyle," and in the years to follow, Time, The New York Times, The Reporter, New Republic, and The Saturday Evening Post regularly published his stories and photographs.

In spring 1965, Jerry's friend and former doctor, Phan Huy Quat, became the new Prime Minister of Vietnam, and he invited Jerry to become an advisor to his government. Jerry agreed, hoping to use his deep knowledge of the country to help Vietnam. In September 1965, while on a trip to investigate corruption in the provinces of Vietnam, he died in a plane crash in Vietnam, leaving behind a treasure trove of journals, letters, stories, and a partially completed novel. The Journalist is the result of his sister, Lucy Rose Fischer, taking those writings and crafting a memoir in "collaboration" with her late brother--giving the term "ghostwritten" a whole new meaning.