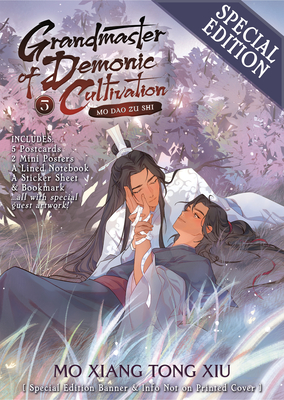 This is book number 5 in the Grandmaster of Demonic Cultivation: Mo Dao Zu Shi (Novel) series.

Limited Edition (one printing only!) of the NEW YORK TIMES BEST SELLER! Also known as MDZS, the blockbuster danmei/Boys’ Love novels from China that inspired comics, animation, and the live-action series The Untamed!

In this final book (Volume 5), read the conclusion to this historical fantasy tale of two powerful men who find each other through life and death. Also includes bonus stories!

Wei Wuxian and Lan Wangji are headed for a showdown at Guanyin Temple, where their path converges with Jin Guangyao and Nie Mingjue's reassembled fierce corpse. With decades-long schemes finally unveiled, and terrible secrets unearthed, the events of this rain-battered night will decide not just the future of the entire cultivation world...but also that of a love story two lifetimes in the making.

Also included in this final volume are eight short stories about what happens when an epic tale ends but life goes on. From magical incense burners to tense banquets, lotus-pod-hunting to Night Hunts with the juniors—these stories span dawn to dusk and so much more!

This limited Special Edition contains the Standard Edition, but with bonus merchandise shrinkwrapped to the book: a set of five postcards, a double-sided bookmark, two folded mini posters, a sticker sheet, and a lined notebook. Don't miss the new art from guest artists included in this special merch!
Mo Xiang Tong Xiu (MXTX) is a globally renowned and New York Times’ bestselling author whose works are often cited as the most well-known of the modern danmei genre. Originally self-published in Chinese via the novel serialization website, JJWXC, her current titles include The Scum Villain’s Self-Saving System, Grandmaster of Demonic Cultivation, and Heaven Official’s Blessing, all available in English from Seven Seas. Her series have enormously popular multimedia adaptations and have been published in numerous languages around the world.