Plagues and Their Aftermath: How Societies Recover from Pandemics (Paperback) 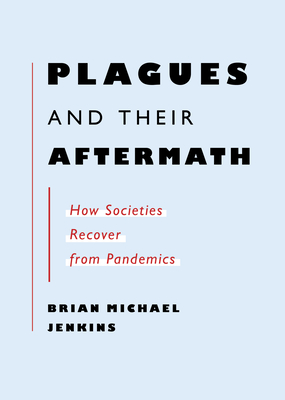 Plagues and Their Aftermath: How Societies Recover from Pandemics (Paperback)


On Our Shelves Now at:
"Jenkins has organized his book around themes, and as he explores them, he leads the reader back and forth through history, pointing out parallels in humankind’s responses to different epidemics...thoroughly researched and cogently written..." -- New York Journal of Books

In a concise, authoritative, and gripping telling, Brian Michael Jenkins — one of our leading authorities on national security and an advisor to governments, presidents and CEOs — provides a masterly account of what kind of future the planet might be facing ... by looking at the world's long history of epidemics and discerning what was common about their aftermath.

From a plague in Athens during the Peloponnesian War in 430 BCE, to another in 540 that wiped out half the population of the Roman empire, down through the Black Death in the Middle Ages and on through the 1918 flu epidemic (which killed between 50 and 100 million people) and this century's deadly SARS outbreak, plagues have been a much more relentless fact of life than many realize.

The legacy of epidemics, Jenkins observes, is not only one of lives lost but of devastated economies and social disorder, all of which have severe political repercussions.

Thus, each chapter of Plagues and Their Aftermath draws on those historical precursors to focus on one particular aspect of their aftermath: What happens to political systems? What happens in the area of crime and terrorism? Do wars happen? What are the effects on cultures? What was the impact of widespread fear and public hysteria, of increased suspicion and scapegoating, of the spread of rumors and conspiracy theories?

Jenkins' sobering analysis is riveting and thought-provoking reading for general readers and specialists alike, and throws welcome light into what many fear is a dark future.
Brian Michael Jenkins is a senior advisor to the president of the RAND Corporation.  He served in the U.S. Army’s Special Forces in during the war in Vietnam, before joining RAND in 1972. In 1996, President Bill Clinton appointed Jenkins to the White House Commission on Aviation Safety and Security. Jenkins has also served as adviser to the National Commission on Terrorism.  He is a frequent commentator on matters of global security and safety for major media outlets including NBC, PBS, NPR, The New York Times, The Washington Post, and others.
"This is an accessible and well-informed assessment of what comes next." -- Publishers Weekly

"With the pandemic apparently past the high-water mark, this book takes a look at what might follow...Jenkins does offer useful historical perspective and rightfully points out that the Covid-19 pandemic’s economic and social consequences will remain with us for a long time, as will the disease itself." -- Kirkus

"Jenkins has organized his book around themes, and as he explores them, he leads the reader back and forth through history, pointing out parallels in humankind’s responses to different epidemics...thoroughly researched and cogently written..." -- New York Journal of Books

"[Jenkins] covers everything from ancient Athens to the effects of SARS, making for an informative and timely read." -- InsideHook

"Chapter by chapter, Jenkins explains how humanity, the economy, our political infrastructure, our military and more will return to a sense of normalcy, and the clues from past pandemics that could help guide our decision-making in the pivotal years to come." --- KPCC's AirTalk