Battle for the Wastelands (Paperback) 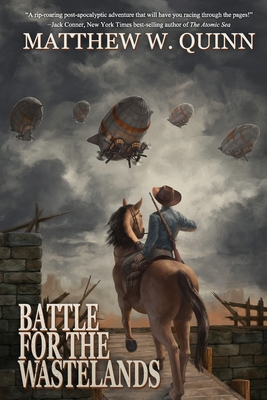 Battle for the Wastelands (Paperback)


Not On Our Shelves—Ships in 1-5 Days
(This book cannot be returned.)
In a desolate world where dirigibles rule the skies and blood soaks the dry earth, a young man joins the fight against a tyrant who has problems of his own. Andrew Sutter returns home from hunting to find drought-wracked Carroll Town under the thumb of a tax collector from the cannibalistic Flesh-Eating Legion. A riot becomes a battle, leaving Carroll Town in ruins and Andrew alone in the merciless Iron Desert. Saved from certain death by the riders of rebel chieftain Alonzo Merrill, Andrew finds himself fighting for their doomed cause. Meanwhile, Grendel, first lord of the Northlands and the Flesh-Eaters' ultimate master, finds his peace of conquest disintegrating as the warlords under his thumb begin battling one another. He plots a new war to reunite them as the starving Merrills launch their last, desperate offensive. And Andrew may be the one holding the key to victory... Fans of Stephen King's Dark Tower, George R.R. Martin's A Song of Ice and Fire, L.E. Modesitt Jr.'s Corean Chronicles, S.M. Stirling's The Peshawar Lancers, and AMC's Into the Badlands will thrill to this fast-paced first volume of a saga of war and intrigue on a continental scale.