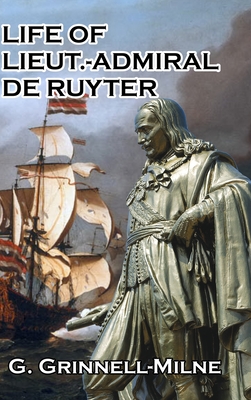 Dutch Admiral Michiel de Ruyter was possibly the single greatest seafaring military leader in European history, leading his nation's fleet into battle against England during three separate wars, as well as fighting the Barbary Corsairs, Sweden, and France during the period 1652 to 1677.
De Ruyter first went to sea as a boatswain's mate boy at the age of eleven, and saw battle by the time he was fifteen. Captured by the Spanish before he was sixteen, he made his way home overland after a daring escape.
His further adventures are then narrated in exciting detail culminating in perhaps the most audacious military sea attack ever seen, that of the June 1667 Raid on the Medway. During that incident, De Ruyter's fleet sailed up the Thames River to where the English Navy was anchored off the Chatham Dockyard and Gillingham in the county of Kent. There they burned or captured three capital ships and ten more ships of the line, and captured and towed away the flagship of the English fleet, HMS Royal Charles-the worst defeat in the Royal Navy's history, and one of the worst suffered by the British military ever.
De Ruyter's stunning career continued, with expeditions in the Baltic and Mediterranean seas against a variety of foes. His adventures were only finally cut short by a French cannonball during his last battle off the island of Stromboli.
"The lessons of such a life and of that portion of the histories of his own and of this country, in which he played a part, tell themselves. The importance of the command of the sea to the greatest maritime community, and the necessity of maintaining an efficient guard over the commerce of a State whose dominions lie in both hemispheres, are self-evident in any clear view of the life of de Ruyter."-from the introduction.