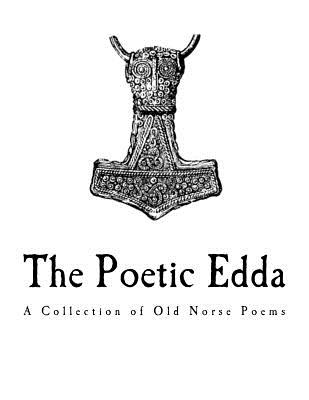 
Not On Our Shelves—Ships in 1-5 Days
(This book cannot be returned.)
The Poetic Edda translated From the Icelandic with an introduction and notes by Henry Adams Bellows. TWO VOLUMES IN ONE. Poetic Edda is the modern attribution for an unnamed collection of Old Norse anonymous poems, which is different from the Edda written by Snorri Sturluson. Several versions exist, all primarily of text from the Icelandic medieval manuscript known as the Codex Regius. THERE is scarcely any literary work of great importance which has been less readily available for the general reader, or even for the serious student of literature, than the Poetic Edda. Translations have been far from numerous, and only in Germany has the complete work of translation been done in the full light of recent scholarship. In English the only versions were long the conspicuously inadequate one made by Thorpe, and published about half a century ago, and the unsatisfactory prose translations in Vigfusson and Powell's Corpus Poeticum Boreale, reprinted in the Norroena collection. An excellent translation of the poems dealing with the gods, in verse and with critical and explanatory notes, made by Olive Bray, was, however, published by the Viking Club of London in 1908. A Collection of Old Norse Poems.