What Lives in the Woods (Paperback) 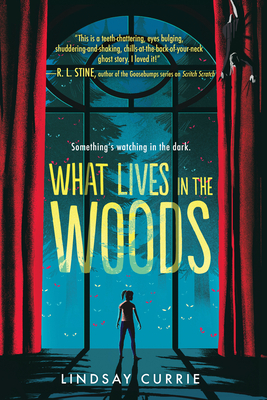 What Lives in the Woods (Paperback)

For fans of Small Spaces and the Goosebumps series by R.L Stine comes a chilling ghost story about a girl living in the decrepit and creepy mansion, who discovers something in the woods is after her.

All Ginny Anderson wants from her summer is to sleep in, attend a mystery writing workshop, and spend time with her best friend. But when Ginny's father--a respected restoration expert in Chicago--surprises the family with a month-long trip to Michigan, everything changes. They aren't staying in a hotel like most families would. No, they're staying in a mansion. A twenty-six room, century-old building surrounded by dense forest. Woodmoor Manor.

But unfortunately, the mansion has more problems than a little peeling wallpaper. Locals claim the surrounding woods are inhabited by mutated creatures with glowing eyes. And some say campers routinely disappear in the woods, never to be seen again.

As terrifying as it sounds, Ginny can't shake the feeling that there's something darker . . . another story she hasn't been told. When the creaky floors and shadowy corners of the mansion seem to take on a life of their own, Ginny uncovers the wildest mystery of all: There's more than one legend roaming Saugatuck, Michigan, and they definitely aren't after campers.

This is a teeth-chattering, eyes bulging, shuddering-and-shaking, chills-at-the-back-of-your-neck ghost story. I loved it --R.L. Stine, author of the Goosebumps series on Scritch Scratch

Pick up What Lives in the Woods if you are looking for: A book for middle school students, 5th grade to 9th gradeA story with a strong female protagonist that explores bravery, friendship, and familyMystery books for kids 9-12Chilling ghost stories and ghost books for kids (perfect for Halloween )