Letting Go Is All We Have To Hold Onto: Humor For Humans (Large Print) (Large Print / Paperback) 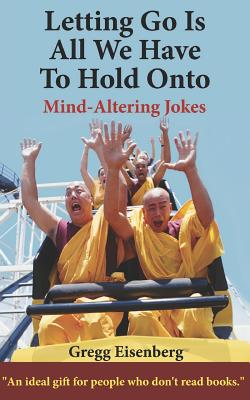 Letting Go Is All We Have To Hold Onto: Humor For Humans (Large Print) (Large Print / Paperback)


Not On Our Shelves—Ships in 1-5 Days
(This book cannot be returned.)
"Mind-bending jokes for that highly-intelligent nephew, that sensitive uncle, or that perplexed parent".
"Sixteen chapters of all-original modern Zen koans."
"An 'iconoclassic' for all ages "
"The people's guide to paradox."
"Hegelian humor for Orwellian times "
"An ideal gift for people who don't read books "

--
(This is the full-size large-print version. A fun-sized/pocketbook version is also available by clicking on "All 3 Versions".) All humor is philosophical inquiry, yes But Austrian linguist Ludwig Wittgenstein went further and wrote: "An entire treatise of philosophy could be written that consists entirely of jokes." Author Evan Hodkins similarly wrote: "The next religion will consist of nothing more than an expansive catalog of humor." And Cesar Cruz said art should "comfort the disturbed, and disturb the comfortable." And now, dear reader, you have stumbled upon a curious but relatable collection of all-original jokes that blends all three thought-streams together into easy-to-digest, family-friendly, bite-sized nuggets called The Eisenberg Principles. ---
"The book that happened while you were making other plans "
"A revolutionary approach to maintaining the status quo "
"For people in recovery from the self-help industry."
--- (From the Preface) - It's rare to find a trifecta of thought streams and modalities as unexpectedly intertwined as what we find in this one-of-a-kind collection of original, one-sentence jokes - aphorisms (or "laughorisms") known as The Eisenberg Principles. In these one-sentence vignettes, the fields of philosophy and psychology marry into uproariously funny trysts of paradoxical play, each one like a piece of deluxe brain-candy which is no less serious in its treatment of the human condition as it is absurd. We are not only afforded a chance to glimpse into the thoughts of this wondrously twisted thinker, we are challenged to follow him into the surprising and impossible rabbit holes of language he unearths on every page. F. Scott Fitzgerald wrote: "The test of a first-rate intelligence is the ability to hold two opposing ideas in the mind at the same time -- and still retain the ability to function." This catalog of contradictions is like a compendium of modern Zen koans that puts you through Fitzgerald's test, playing with the principles of paradox, polarity, and incongruity, and taking you from the "comforts of clich " to the "chasms of contradiction" with just a few strokes of a pen.
------
"Many of the jokes Eisenberg unspools have the psychic charge of a Zen koan, the brevity and immediacy of a haiku, and aim to capture the absurdity of an existence that can make the most sense when efforts to comprehend it are fully abandoned." Charles Brennan, Boulder Daily Camera. "Eisenberg uses verbal gymnastics to twist and stretch the boundaries of logic, throwing the semantics of everyday expressions into question - stirring our collective conversation about consciousness forward." Michael Travers, EJI
---
This is the Large-Print size. There is also a fun-sized pocketbook edition for sale on Amazon, found by clicking on "All Three Versions" and exploring the drop-down menu). "When we said humor can lead to enlightenment, we were not joking "
Gregg Eisenberg
----
Enjoy a few clips of the author reading from this book in the Museum of Boulder (Colorado) in Oct. 2019: https: //cutt.ly/ArqYzDs
Enjoy an in-depth interview with the author about the streams of ideas running through his material: https: //cutt.ly/6rqYlIb Curved-Space Comedy: Beating the Conundrums since 2001. "We live vicariously, so you don't have to." www.curvedspacecomedy.com --- for clips, snips, interviews and songs.