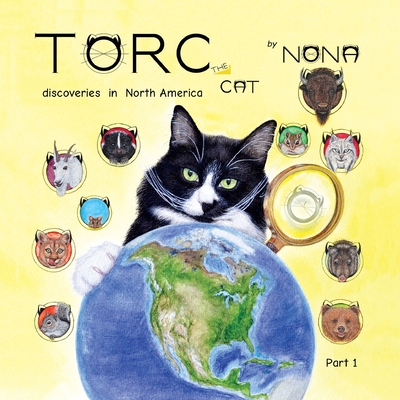 TORC is the One of a kind CAT , with two book series in work: TORC the CAT discoveries and TORC the CAT short stories. TORC was rescued in 2009 from an animal shelter in Washington State, USA. His curiosity and his loving nature inspired NONA to create her TORC the CAT character.

In the TORC the CAT discoveries book series, children will be able to let their imaginations wander the globe with TORC the CAT on his adventures. This educational and interactive children's book series will cover all the continents of the planet while following a pattern of two books per continent. Each continent will be followed by a wonderful special with a unique thematic.

In his first book, TORC the CAT interacts with a select variety of animals from North America. He meets wonderful characters such as:

✔ Nanny the mountain goat and her kid Rocky

✔ Enigma the cougar with her two kittens Hiss and Yowl

✔Big Paws the Canadian lynx with her three kittens Tuft, Ruff and Bob

✔ Mama Grizzly the protective bear, with her three cubs Wiggle, Jiggle and Waggle.

TORC the CAT wants to help young children become familiar with a broad variety of animal species and to learn some facts about each one along the way. His secret hope is that he can spark a desire for learning that will continue well into adulthood