The Right of Conquest Madness in Matabeleland (Paperback) 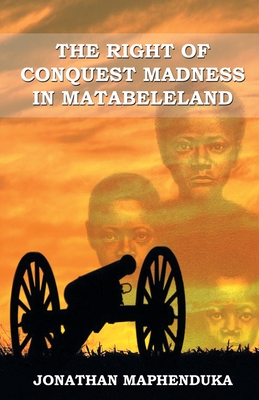 The Right of Conquest Madness in Matabeleland (Paperback)

There are several unexplained episodes in the invasion and destruction of the Matabele Kingdom by the British South Africa Company in 1893, in the face of at least two treaties of friendship with the United Kingdom.

In one episode, A lighting and tragic campaign, which began in October 1893, the Matabele warriors lost 6000 men in one battlefield alone against less than 500 British troops (all told) who lost their lives during the entire war and uprising that followed in 1896.

Nevertheless, the Matabele Warriors, primarily armed with primitive weapons, did give a good account of themselves against heavy odds, and this led to British xenophobia against them, which is manifest to this day. The Matabele Kingdom became the only one in Southern Africa to be denied British protection even though the Kingdom went begging for it, and Britain had signed two treaties of friendship with Mzilikazi and Lobengula. This book is a historical and political satire that seeks to highlight some of the war crimes which were committed by the invading British forces using devastating precision and heavy weaponry. The devastating Maxim gun and artillery were used in the Anglo-Matabele war for the first time in Africa to "smash and teach the Matabele a lesson of their life".

One of the episodes involves the removal of three sons of King Lobengula "to be educated" by Cecil John Rhodes in his Cape Colony domain.

The three princes, Njube, Nguboyenja and their sibling Mpezeni, were taken away from their people by force and never allowed to return home alive. Mpezeni, drowned in Port Elizabeth on arrival in 1898. No one knows how it happened.

Nguboyenja and Njube died in 1908 and 1910, respectively, from a mental disease which resulted from being forced to endure the life of a prisoner.

The official explanation for their removal from their home environment is that they were taken to be educated by the arch-enemy of the Matabele Monarchy, Cecil John Rhodes.

Another notable episode was the deposition of Lobengula's heir to the throne, Nyamande who had been installed in 1896 to succeed his father. When he refused to be deposed to the level of a senior chief in the district of Bulawayo, following the end of the 1896/7 rising, he was in January 1897 restricted to his rural home where he died a recluse.