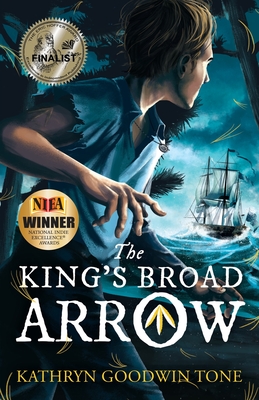 An action-packed novel that doubles as a history lesson.

The King's Broad Arrow tells two stories of transformation. The first is that of Sam Nevens, a boy reluctant to be swept away by the revolutionary fervor taking over the colonies in 1775. Sam is outwardly skeptical of his responsibility to fight and inwardly doubtful of his own courage. He is tested and transformed by a remarkable journey which includes: being trapped on a British prison ship; hiding out in occupied Boston; joining Paul Revere in a search for gunpowder for the Continental Army; helping Thomas Paine print American Crisis; engaging in philosophical discussions with George Washington; meeting a beautiful Loyalist spy, and fighting alongside Alexander Hamilton. By the end of his journey, Sam has grown into a young man confident in himself and his devotion to the Revolution.

Sam's story mirrors the second transformation - that of the colonies as a whole. Like Sam, Americans began the war unsure of their ability to stand up against the most powerful country in the world. With doubts about the validity of their cause and the feasibility of creating a country independent of England, they nonetheless persevered in building a nation based on the untested concepts of meritocracy and self-government. With fascinating historical details and enthralling adventure, The King's Broad Arrow shows how the power of ideas, for both individuals and a nation, changed the way they saw themselves. A story that began with an army of ragtag rebels fighting an unwinnable war grew into one of audacious heroes - soldiers and citizens, creating a country unlike any the world had ever known.