In One Ear and Out the Other: Antonia Brico and her Amazingly Musical Life (Amazing Women) (Hardcover) 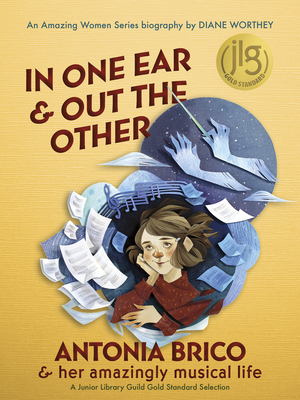 In One Ear and Out the Other: Antonia Brico and her Amazingly Musical Life (Amazing Women) (Hardcover)

In a time when women were told they couldn't become conductors, Antonia Brico didn’t listen to discouraging words. Those words went in one ear and out the other.

The second title in Penny Candy’s Amazing Women Series of nonfiction picture books, In One Ear and Out the Other: Antonia Brico & Her Amazingly Musical Life tells the story of one woman’s fight to gain recognition as a conductor in an era when men dominated classical music. The first woman to guest-conduct the New York Philharmonic Orchestra, Antonia Brico never secured a permanent conducting job with a major symphony—but her contributions paved the way for the many women conductors to follow. A true visionary in the long fight for equal opportunities for women.

Diane Worthey is a violinist in the Washington-Idaho Symphony and teaches violin and viola to all ages of students at the University of Idaho Preparatory Division. As a teenager growing up in Denver, Colorado, she performed in the Brico Symphony (now The Denver Philharmonic) under Maestra Brico. In One Ear and Out the Other is Diane’s first children’s book. She lives a creative life with her husband and loyal corgi, Sir Galahad, in Pullman, Washington.

Morgana Wallace was born into an artistic family in Winnipeg, Manitoba, and later studied at the Victoria College of Art, before becoming a full time artist. As a child, she was captivated by book illustrations and still believes they are as important as the words. Her medium is mainly paper collage, but she incorporates watercolor, ink, and pen to create her imaginary world of characters. She has had several successful shows at Victoria’s Madrona Gallery, as well as completing four commissions for the British children’s magazine, Aquila. In One Ear and Out the Other: The Amazingly Musical Life of Antonia Brico is her second picture book with Penny Candy Books, after 2019's Hedy and Her Amazing Invention. She lives in Victoria, British Columbia.

"Now forty-four years after Judy Collins and I made a film about the extraordinary symphony conductor, Antonia Brico, the first woman to conduct major symphonies, in Berlin, London, Los Angeles, New York, I have just read, with great delight, a richly nuanced book for children, In One Ear and Out the Other, about dear Antonia and her determination to become the orchestra conductor she wanted to be. For young girls especially, this quietly vigorous book will inspire courage and determination for them to achieve their dreams." —Jill Godmilow, co-director of Antonia: A Portrait of the Woman

"Dr. Antonia Brico was my teacher from the time I was 10 years old. She was a dynamic and amazing woman. Now we have a beautiful book about her life where little children can learn what can happen when you pursue your dreams and do what’s in your deepest heart. Never give up on your dreams, Antonia says, never let anybody tell you that you can’t do something you want to do! And always believe that miracles can happen! What a beautiful book is In One Ear and Out the Other: The Amazingly Musical Life of Antonia Brico!" —Judy Collins, singer/songwriter and co-director of Antonia: A Portrait of the Woman

"Women can’t conduct orchestras, they said, but Antonia Brico did...This straightforward biography of a woman who paved the way for today’s women conductors (still few in number) is the second in a promising series of titles about Amazing Women. The author performed under Brico’s baton as a teenager. Chronologically organized, attractively illustrated, carefully sourced, and accompanied by a helpful timeline, this also includes minibiographies of three other early female conductors as well as three from the present day. Ideal for girls with professional dreams of their own. (Biography. 7-12)" —Kirkus Reviews

"More than anything, Antonia Brico (1902–1989) wanted to be the professional conductor of an established orchestra. Though her dream was stymied by systemic sexism in the classical music world (she finished her career giving piano lessons and conducting a semiprofessional orchestra), her achievements inspired the next generation of women conductors. Worthey, a musician who played in the Brico Symphony under the figure, infuses this straightforward telling of Brico’s life with passion, emphasizing her persistence...Wallace combines sensitive watercolor, ink, pen, and cut-paper collage in illustrations that convey Brico’s dauntless determination. Includes a timeline and capsule biographies of three current women conductors and three women trailblazers in classical music and conducting. Ages 7–11." —Publisher's Weekly