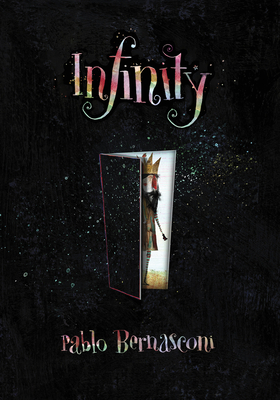 How many ways are there to define forever? With machines that power the sun and moon, ballet dancers, desert islands, abandoned bird cages, firefighters, physics, Shakespeare, and more, Argentinian author-illustrator Pablo Bernasconi, finalist for the 2018 Hans Christian Andersen Award, creates a universe where the possibilities are endless.

Pairing stunning imagery with poetic meditations, Bernasconi invites kids and adults to use their imaginations to consider the concept of infinity. Is it an idea that refuses to be caged in a word? Maybe! Is it a jar full of stories and white ink spilled on the snow? Could be! Winner of the Grand Prize from the Asociación de Literatura Infantil y Juvenil de la Argentina (ALIJA) in 2018, Infinity works equally well as a bedtime story, a teaching prompt, or a graduation gift.

Pablo Bernasconi was born in Buenos Aires, Argentina, on August 6, 1973. He is a graphic designer who graduated from the University of Buenos Aires, where he was also a professor of Design and Head of Practical Assignments for five years. He began his career as an illustrator for Clarín newspaper in 1998, creating the cover page artwork for more than three hundred and fifty supplement editions. He also used to publish a critical review in La Nación every Sunday. Some of his illustrations have been published in newspapers and magazines all around the world, including the New York Times, Wall Street Journal, Saturday Evening Post, Telegraph and the Times of England. Besides his media work, Pablo is a continuous collaborator with the human rights organization Grandmothers of the Plaza de Mayo for their design and graphic projects. He is the award-winning author and illustrator of sixteen books, and he has illustrated another twenty books by other authors.
★ "Salvador Dalí meets Tim Burton in picture book form." —Foreword Reviews, starred review

★ "Rendered alongside unexplained equations and symbols (“some are personal, others mystical or mythical” reads a note), each spread lands with a conceptual splash before moving briskly on to the next; together, they comprise a remarkable thought experiment for readers of all ages."  —Publishers Weekly, starred review