The Micro-State Utopia and the Path to Wholeness: A Voluntarist Manifesto (Paperback) 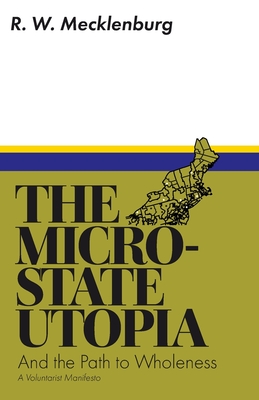 The Micro-State Utopia and the Path to Wholeness: A Voluntarist Manifesto (Paperback)

"Whenever something is wrong, something is too big," Leopold Kohr wrote in 1957. But does Kohr's brilliant maxim hold true of certain things or of all things, states included? R. W. Mecklenburg answers this question in his concise book about small states, The Micro-State Utopia and the Path to Wholeness, in which he says small states are richer, freer, prettier, and more whole places in which to live.

"What does it mean to be free?" Mecklenburg asks. Is freedom the absence of rules or the absence of forceful rules? And what makes a rule forceful? Bigness, Mecklenburg answers, which is why freedom results from smallness, not anarchy as many libertarians have erroneously argued for decades.

Not only does bigness make man less free, it also makes him less whole. A body can have only one brain, and when many states and billions of men unite into one economic, political, and social corpus, then billions will have dissolved their brains to become mere appendages of something beyond them. But can an appendage be whole? Can it be human? Mecklenburg thinks not.

As man sits on the cusp of what we might call the Fourth Industrial Revolution, Mecklenburg asks the most important question of our time: Are we ready to enter global serfdom, in which man is as free and whole as a robot, whose values are vicarious and whose brain is dissolved? Or are we ready to return to local markets, micro-states, and small communities, in which freedom, beauty, and humanity reign supreme, regardless of the philosophies that govern them?