Generations: Lullaby with Incendiary Device, the Nazi Patrol, and How It Is That We (Paperback) 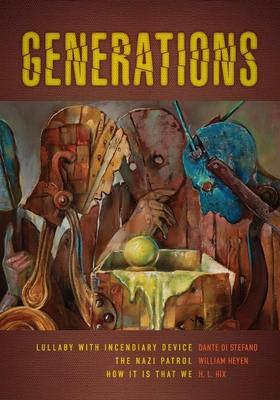 Generations: Lullaby with Incendiary Device, the Nazi Patrol, and How It Is That We (Paperback)


In Stock—Click for Locations
In the third Tribus by Etruscan Press, we present
work by poets William Heyen, H. L. Hix, and Dante Di Stefano. Di Stefano's Lullaby with Incendiary Device
inspired this tribute to three generations. Upon receiving this submission, we
decided that a joining work which has defined Etruscan over the past
twenty years would be the best way to advance the dialogue. Lullaby is deeply immersed in a soon-to-be-realized
future, in which Di Stefano's daughter faces an array of 21st
century challenges. Heyen's poetry has explored world history, from Nature, to
Native Americans, to the Holocaust and the atom bomb, the Iraq Wars, to the
British Royals. His driving, eclectic force is unmatched in contemporary
poetry. Heyen presents another entry into his Holocaust opus, The Nazi
Patrol. H. L. Hix's work is also inextricably involved with the world, as
seen in a recent collection, American Anger, which explores the
psychology of rage underneath recent political turmoil, and God Bless,
adapted from the speeches of George W. Bush and the tirades of Osama Bin Laden.
Yet, his work also turns inward, creating new forms to join the world and the
inner life. This theme is most prominent in How It Is That We.

Dante Di Stefano is the author of
Ill Angels and Love Is a Stone Endlessly in Flight. He co-edited
the anthology Misrepresented People: Poetic Responses to Trump's America.

William Heyen won the Small Press
Book Award for Crazy Horse in Stillness, and was a National Book Award
Finalist for Shoah Train.

H. L. Hix's recent
books include The Death of H. L. Hix, a translation of The Gospel, and
Demonstrategy.