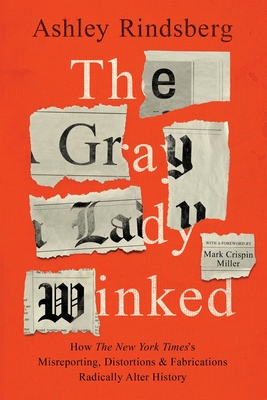 "The New York Times is by far the most influential newspaper in the world and thus receives far too little journalistic scrutiny due to its power to affect careers. Any book that casts a critical eye on the Paper of Record's history, as this book does, is performing a valuable service." - Glenn Greenwald, Journalist & New York Times Bestselling Author

As flagship of the American news media, the New York Times is the world's most powerful news outlet. With thousands of reporters covering events from all corners of the globe, the Times has the power to influence wars, foment revolution, shape economies and change the very nature of our culture. It doesn't just cover the news: it creates it.

The Gray Lady Winked pulls back the curtain on this illustrious institution to reveal a quintessentially human organization where ideology, ego, power and politics compete with the more humble need to present the facts. In its 10 gripping chapters, The Gray Lady Winked offers readers an eye-opening, often shocking, look at the New York Times's greatest journalistic failures, so devastating they changed the course of history.

The result is an essential look at the tangled relationship between media, power and politics in a post-truth world told with novelistic flair to reveal a uniquely powerful institution's tortured relationship with the truth.

Most importantly of all, The Gray Lady Winked presents a cautionary tale that shows what happens when the guardians of the truth abandon that sacred value in favor of self-interest and ideology-and what this means for our future as much as for our past.

"For 99 years-since a 1922 description of Hitler as someone 'actuated by lofty, unselfish patriotism'-it has labored under the shadow of its dynastic owners' triad of problems: capitalist guilt, Jewish self-hatred, and an ambition for power, wealth, and status. - Daniel Pipes, President, Middle East Forum