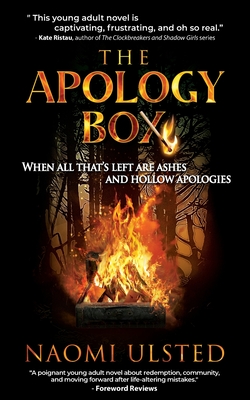 When sixteen-year-old Tessa's small mountain community is ravaged by a forest ﬁre, people come together to heal. Except Tessa. Because she set the blaze.

This debut novel by Naomi Ulsted follows Tessa as she tries to pull a new life from the ashes of a big mistake. When the judge hands out a sentence of massive ﬁnes, community service and 227 apology letters - one for every person whose life she's ruined - Tessa wishes she'd been sent to prison, that life behind bars might be better than the one she's forced to live. Choked by shame and resentment, and shunned by her friends and neighbours, the only person she can lash out at is herself. An unlikely friendship, a painful discovery, and a box full of apology letters may be the only chance Tessa has at redemption.