Days of Trump: The Definitive Chronology of the 45th President of the United States (Hardcover) 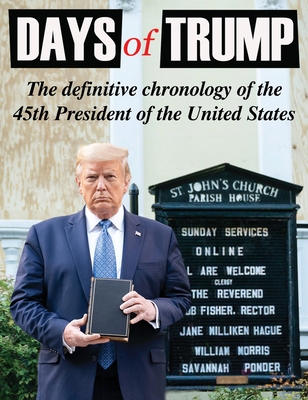 Days of Trump: The Definitive Chronology of the 45th President of the United States (Hardcover)

"Devine's Days of Trump is the only book of its kind - a complete and comprehensive reference of the day-by-day chaos that was the Trump presidency."

"... a historical "must have" reference of a book unlike any other Trump book on the market today."

"Having already read Rage, Fear, and Peril, I find Days of Trump is a consummate companion to the Woodward-Costa trilogy. All refreshingly objective, factual, and accountable."

"Given the objectivity of the writing and the ceasing endless high drama of this administration, the reader is left to decide if Trump is a political genius who understood the game better than the D.C. intelligentsia, or a profane, unprincipled demagogue with no respect for the checks and balances of the Constitution or the rule of law."

A lot happened in the 1,461 days of the presidency of Donald J. Trump. So much so that no one could possibly retain it all without extensive notes. Working off the whirlwind mantra of "flood the zone," Trump mesmerized fans and critics by his daily gyrations and machinations, aiming to "own the news cycle" like no previous president ever has.

Chronicling one of the most unique presidencies of all time, "Days of Trump" recounts nearly every day of the Trump presidency including domestic and international agendas like the Summit with North Korea's Kim Jong Un (aka: "Little Rocketman"), meetings in the Middle East, the G-7, two visits with Queen Elizabeth, meeting the Pope and the historic Helsinki meeting with Vladimir Putin and more.

Of course, what would a Trump book be without some of the more uniquely Trump moments like "Tim Apple," "Covfefe" or Kellyanne's "Alternative Facts" and Bowling Green Massacre, Trump's offer to "buy Greenland," Don Jr.'s "If it's what you say, I love it." Jim Comey's "Lordy, I hope there are tapes " and Trump's final approach to "Stop the Steal." It's all there and much more

With over 500 photos, documents and weblinks, Days of Trump may be the most comprehensive resource for political historians and lay people alike.

Tim Devine is an award-winning news and editorial writer, former music, entertainment and technology executive and Political Science and Media graduate from the University of California, Berkeley. He lives in Los Angeles with his wife Lynn.

Amanda Decker is an award-winning journalist with 20 years experience working as an anchor, reporter, producer, web writer, executive producer and news director. Decker has received major broadcast awards for coverage of veteran's issues, natural disasters, and auto racing, and has also been honored by several organizations for her volunteer work.