Trees: An Anthology of Writings and Paintings (Hardcover) 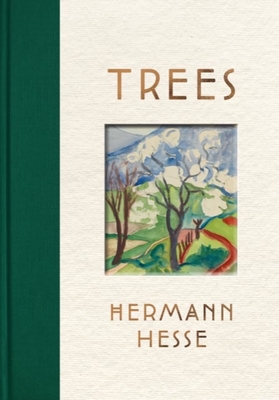 Trees: An Anthology of Writings and Paintings (Hardcover)

An elegant collection of Hermann Hesse’s essays, poems, and passages on the subject of trees and nature, accompanied by thirty-one of his watercolor illustrations.

Hermann Hesse understood trees to be symbols of transcendence and rebirth, of instinctive growth present in all natural life. This elegant collection of his essays, poems, and passages on trees, accompanied by thirty-one of his watercolor illustrations, reveals his inspired thoughts on nature, spirituality, and self-knowledge. Together, his writings and paintings mirror the seasons and landscapes as he experienced them, and help remind us that trees’ annual rings are representations of our own days’ struggle, happiness, and purpose.

In the author’s words: “They struggle with all the force of their lives for one thing only: to fulfill themselves according to their own laws . . . Whoever has learned to listen to trees no longer wants to be one. He wants to be nothing except who he is.”

HERMANN HESSE was born in 1877 in Calw, Germany. He grew to become a celebrated author and the recipient of the Nobel Prize in Literature in 1946. As the son of missionaries, he developed a fascination with self-discovery and spiritual explorations, an interest also likely due in part to his lifelong struggle with depression, which led him to study Sigmund Freud and, later, to undergo psychoanalysis with Carl Jung. In 1912 he moved to Switzerland, where he wrote his best-known books, including the classic Siddhartha; composed poetry; and painted landscapes. He passed away in 1962 in Montagnola, Switzerland. Hesse is one of the most widely translated authors of the twentieth century; his work continues to have influence worldwide.


Damion Searls is a prize-winning translator of fifty books from German, French, Norwegian, and Dutch. Liveright published his translation of Rainer Maria Rilke’s Letters to a Young Poet in 2020.

Superbly illustrated with 31 full-color watercolors painted by Hermann Hesse, 'Trees: An Anthology of Writings and Paintings' is extraordinary and unreservedly recommended.

"... one of humanity’s most beautiful love letters to trees…
— MARIA POPOVA - The Marginalian