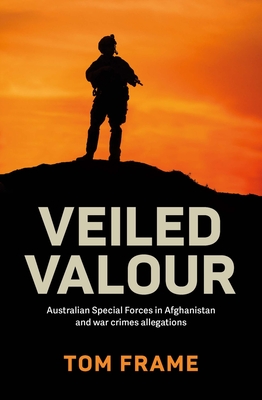 
Not On Our Shelves—Ships in 1-5 Days
(This book cannot be returned.)
The Brereton report—the findings of a long-running inquiry into war crimes allegations involving members of the Australian Special Operations Task Group during their 2005-13 deployment to Afghanistan—was publicly released on 19 November 2020. Veiled Valour, from one of Australia’s most respected military affairs analysts, explores the background to these allegations—the gradual demise of the Afghan state and society, the decision to deploy Special Forces personnel to Central Asia after 2001, the inquiries into apparent mistakes and alleged misconduct, and the shocking hearsay and rumours that led to a formal inquiry. Ending the day before the Brereton report’s public release, Veiled Valour sheds light on why the inquiry was necessary, how its investigations were conducted, where the media influenced its direction, and what the public expected to be told about its military elite.
Tom Frame has been a naval officer, Anglican Bishop to the Defence Force, a member of the Australian War Memorial Council, and a theological college principal. He became Professor of History at UNSW Canberra in July 2014 and was appointed Director of the Public Leadership Research Group in July 2017. He is the author or editor of more than 50 books.