Where I'm Coming From (Hardcover) 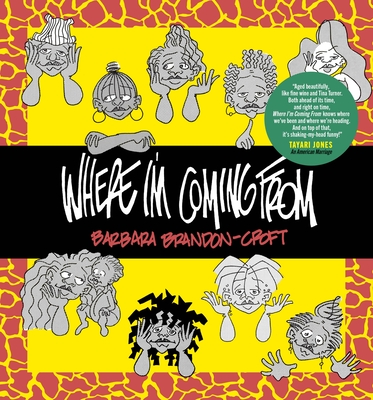 Where I'm Coming From (Hardcover)

A seasoned cartoonist of epic proportions, Brandon-Croft carves out space for Black women’s perspectives in her nationally syndicated strip

Few Black cartoonists have entered national syndication, and before Barbara Brandon-Croft, none of them were women. From 1989 to 2005, she brought Black women’s perspectives to an international audience with her trailblazing comic strip Where I’m Coming From.

From diets to day care to debt to dreaded encounters with everyday racism, no issue is off-limits. This remarkable and unapologetically funny career retrospective holds a mirror up to the ways society has changed and all the ways it hasn’t. The magic in Where I’m Coming From is its ability to present an honest image of Black life without sacrificing Black joy, bolstered by unexpected one-liners eliciting much-needed laughter.

As the daughter of the mid-century cartoonist Brumsic Brandon Jr.—the creator of Luther, the second nationally syndicated strip to feature a Black lead—Brandon-Croft learned from the best. With supplementary writing by the author and her peers alongside throwback ephemera, this long-overdue collection situates Brandon-Croft as an inimitable cartoonist, humorist, and social commentator, securing her place in the comics canon and allowing her work to inspire new readers at a time when it is most needed.

Barbara Brandon-Croft was born in Brooklyn and grew up on Long Island. After debuting her comic strip Where I’m Coming From in the Detroit Free Press in 1989, Brandon-Croft became the first Black woman cartoonist to be published nationally by a major syndicate. During its 15 year run, Where I’m Coming From appeared in over 65 newspapers across the USA and Canada, as well as Jamaica, South Africa, and Barbados. Her comics are in the permanent collection of the Library of Congress. Brandon-Croft lives in Queens.

"Unapologetic truth! Barbara Brandon-Croft's comics transcribe a multitude of Black voices page after page. Where I'm Coming From is more than just social commentary, it's a rare gem of Black perspective that reveals not much has changed, but you won't need to read between the lines to understand how easily it could."—Taneka Stotts, Elements: Fire – A Comic Anthology by Creators of Color

"Barbara Brandon-Croft’s charming gestural lines and elegant take on the comic strip draw an intimate portrait of Black womanhood, Black friendship, and Black love. This collection sheds light on how Where I’m Coming From came to be and affirms Barbara Brandon-Croft’s seat at the table. Her strip is funny, serious, alluring, and transformative."—Ebony Flowers, Hot Comb

"Where I’m Coming From is a treasure. Art meets archive in one beautiful, bountiful book chronicling Barbara Brandon-Croft’s pivotal work as the first Black woman syndicated cartoonist in the U.S. The wit, worries, and womanhood of 1990s Black culture come to life through diverse Black women’s points of view. Though she didn’t dream of becoming a cartoonist as a kid, the legacy, politics, and humor of Brandon-Croft’s cartoonist father, Brumsic Brandon, Jr., are here as well. But make no mistake, the snappy dialogues and affirming, close-up cartoon images (and t-shirts!) of Brandon-Croft's era stand all on their own. This is a must-have book!"—Yona Harvey, Poet and Co-Author of Marvel Comics' Black Panther: World of Wakanda

"What's your big 3? I think I'm a Cheryl sun, a Judy moon, and a LeKeisha rising. Whoever you identify with, Babara Brandon-Croft knows how to build characters that have such realness they feel like people you know. I toggle between wanting to be their friend to feeling like a child of the 90s, secretly listening in on "grown folk" conversations. The topics are so candid and timeless it feels impossible that many of these stories were written over 30 years ago. Where I'm Coming From shows how far we have come as a culture with glimpses of how much more progress we need in the world of comics, black and women's rights. I am grateful to follow in Barbara's footsteps and hopefully add to the conversation she has already started."—Bianca Xunise, Six Chix

"Barbara Brandon-Croft is cartooning royalty as far as I'm concerned. Her work is so good at capturing the conversations that I'd hear in my auntie's salon. So real, yet so rare for the comics page."—Keith Knight, The K Chronicles, co-creator of Woke

“Distinctly and quietly funny takes on life, love, and all the stuff in between.”—Essence Magazine

“From rape convictions to “Don’t Ask, Don’t Tell” to the challenges of being a single mother, the diversity of Brandon-Croft’s characters’ conversations showcased a depth of feeling and sharpness of intellect that representations of Black women in media so desperately needed.”—Black Nerd Problems

“[Barbara Brandon-Croft] explores humorously the serious issues affecting Black people and the nation as a whole, from the Clarence Thomas hearings to the Rodney King verdict and questions of equal justice.”—The New York Times