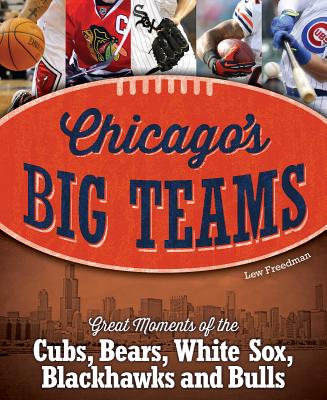 Chicago is a 21st-century city that is not only represented by all four major team sports--football, basketball, hockey and baseball--but is also blessed with two long-standing Major League Baseball franchises, one in each league.

In Chicago's Big Teams, author Lew Freedman offers readers a comprehensive and interesting look into the histories and heroes that have made each franchise tick.

In 28 unique essays, Chicago's Big Teams unwraps the stories behind the men, moments and circumstances that have forged these great franchises and unforgettable champions.

Chicago's Big Teams pays homage to Soldier Field, Wrigley Field, U.S. Cellular Field and the United Center, as well as the revered structures that came before them, like Comiskey Park and Chicago Stadium.

Packed with more than 150 photos, Chicago's Big Teams is the most comprehensive book on the best of Chicago's professional sports teams.

Includes profiles on the following:

Lew Freedman is a veteran prize-winning journalist who has written for the Chicago Tribune sports staff and other newspapers. He is the author of dozens of sports books, including many about the Chicago Bears, the Chicago Cubs, the Chicago White Sox and Loyola University's 1963 NCAA basketball championship. He is also the author of Football Stadiums (Firefly Books, 2013). He lives in Chicago.