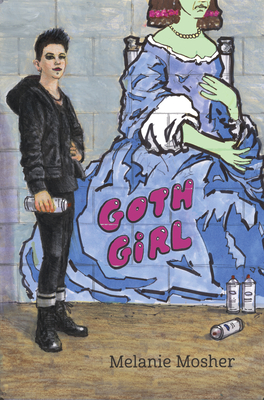 There are only three things fifteen-year-old Victoria Markham truly enjoys: English class, her signature Goth Girl look, and art. It's just that she tends to do the last one late at night, with spray paint, in public places. It isn't long before Vic is caught red-handed and forced into community service with a bunch of stereotypes: there's Rachael, the princess; Russell and Peter, a pair of fist-bumping punks; and Zach, the rich jock, who Vic is secretly crushing on. The motley crew has to collaborate to produce a mural for Halifax, but getting it organized is like herding cats.

On top of all that, Vic's mother's boyfriend, the only father figure Vic has ever known and the one who taught her to paint, left them both. Vic's mother is still reeling, her relationship with her daughter strained. She doesn't understand Vic's insistence on spiking her hair, piercing her nose and lip, and wearing black clothing and heavy makeup. Vic is convinced her mother doesn't care enough to find out what's really behind the get-up.

Tensions run high as Vic tries to figure out who she is: Victoria Markham, or Goth Girl? Sometimes, there's more to people than meets the eye.

Melanie Mosher grew up in Amherst, Nova Scotia, and won an essay contest in grade two, sparking her imagination and beginning a lifelong love of stories. Fire Pie Trout received honorable mention in the Atlantic Writing Competition and later became her first published picture book. Melanie now lives in Gaetz Brook and continues to make up stories to share with her granddaughter, Emma.