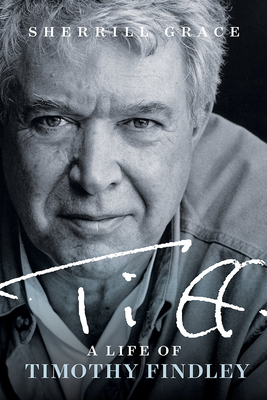 Timothy Findley (1930-2002) was one of Canada's foremost writers--an award-winning novelist, playwright, and short-story writer who began his career as an actor in London, England. Findley was instrumental in the development of Canadian literature and publishing in the 1970s and 80s.

During those years, he became a vocal advocate for human rights and the anti-war movement. His writing and interviews reveal a man concerned with the state of the world, a man who believed in the importance of not giving in to despair, despite his constant struggle with depression. Findley believed in the power of imagination and creativity to save us.

Tiff: A Life of Timothy Findley is the first full biography of this eminent Canadian writer. Sherrill Grace provides insight into Findley's life and struggles through an exploration of his private journals and his relationships with family, his beloved partner, Bill Whitehead, and his close friends, including Alec Guinness, William Hutt, and Margaret Laurence. Based on many interviews and exhaustive archival research, this biography explores Findley's life and work, the issues that consumed him, and his often profound depression over the evils of the twentieth-century. Shining through his darkness are Findley's generous humour, his unforgettable characters, and his hope for the future. These qualities inform canonic works like The Wars (1977), Famous Last Words (1981), Not Wanted on the Voyage (1984), and The Piano Man's Daughter (1995).