How to Avoid Huge Ships (Paperback) 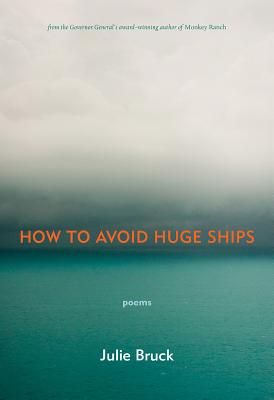 How to Avoid Huge Ships (Paperback)

Both grave and brave, serious and hilarious - new poems from a Governor General's Award?winning poet.

How to Avoid Huge Ships, Julie Bruck's fourth collection of poetry, is a book of arguments and spells against the ambushes of age. This is, of course, a pointless exercise with a rich history. Bruck's new poems excavate a middle zone as old parents wither and regress, while the young declare their independence. Parents grow down, children up, and it's from the uncomfortable in-between that these poems peer into what Philip Larkin describes as the long slide. But what if we haven't reached the end of the infinite adolescence we thought we'd been promised? We're still here in this world of flying ottomans, alongside a middle-schooler named Dow Jones, and the prehistoric miracle of a blue heron's foot. We may be afraid, but we're still amused - sometimes, even awed.

Looking squarely at the way things are, glossing over none of the absurdities and injustices of contemporary life, Julie Bruck pays ardent attention to it all. This is a subtle art, restrained. Its power often lies in what is not said right out but which fires up in a reader. The touch is light, even when the subject is heavy. One has a steady sense of being trusted to catch and feel the intangible muchness housed in deceptively plain poems.

She is the poet laureate of aftermath, of what we do in the wake of things. She picks up the broken pieces of what's left, and these she patches together, as she can, into beautifully-wrought poems that bear eloquent witness to what remains. - Se n Kennedy

Julie Bruck has published three previous collections with Brick Books, most recently, Monkey Ranch, which received the Governor General's Award for Poetry in 2012. Recent work has appeared in The New Yorker, Best Canadian Poetry, The Academy of American Poets' Poem-a-Day, Plume, The Puritan, Hazlitt, and The Rusty Toque. A long-time Montrealer, she lives in San Francisco.