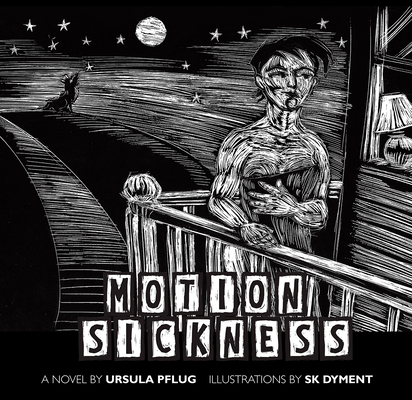 Motion Sickness is a flash novel consisting of 55 chapters of exactly 500 words each and accompanied by a wood-cut like, scratchboard illustration. The illustrations are dark and somewhat whimsical as is the text. Penelope, the twenty-year old narrator is a guitarist who writes some lyrics, has a good colour sense and a social conscience. She has kicked a drug habit and is now mainly drinking and sometimes jamming in after-hours clubs as well as writing letters of protest. She finds herself alone when her roommate goes to Calgary to be with her mother who has breast cancer. At the same time she is increasingly attracted to Theo, a slightly older bass player who turns out to be married and who shares a similarly poetic take on the world, but who, unlike her, sticks with people and jobs. He finds her employment with him silk screening T-shirts where they develop a more intimate but non- sexual relationship. In between birth control methods she finds herself pregnant after a drugged threesome which involved the very sexy but potentially violent Stan. She has an abortion. Stan becomes a frightening stalker. Theo remains a stable anchor and it becomes increasingly clear to both of them as well as to Theo's wife that their intimacy is not to be ignored. This is a smart, engaging, well-written novel that should appeal particularly, but by no means exclusively, to young women dealing with the responsibility of reproductive control, finding their way in the world of creative work and the social life of a young single person.