Child Soldier: When Boys and Girls Are Used in War (CitizenKid) (Hardcover) 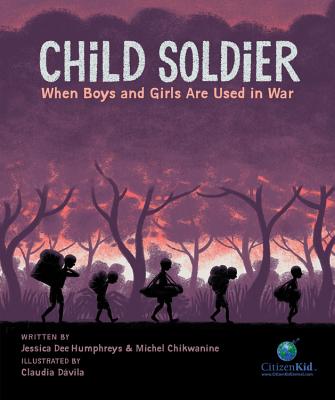 Child Soldier: When Boys and Girls Are Used in War (CitizenKid) (Hardcover)


Not On Our Shelves—Ships in 1-5 Days
Michel Chikwanine was five years old when he was abducted from his school-yard soccer game in the Democratic Republic of Congo and forced to become a soldier for a brutal rebel militia. Against the odds, Michel managed to escape and find his way back to his family, but he was never the same again. After immigrating to Canada, Michel was encouraged by a teacher to share what happened to him in order to raise awareness about child soldiers around the world, and this book is part of that effort. Told in the first person and presented in a graphic novel format, the gripping story of Michel's experience is moving and unsettling. But the humanity he exhibits in the telling, along with Claudia Dávila's illustrations, which evoke rather than depict the violent elements of the story, makes the book accessible for this age group and, ultimately, reassuring and hopeful. The back matter contains further information, as well as suggestions for ways children can help. This is a perfect resource for engaging youngsters in social studies lessons on global awareness and social justice issues, and would easily spark classroom discussions about conflict, children's rights and even bullying. Michel's actions took enormous courage, but he makes clear that he was and still is an ordinary person, no different from his readers. He believes everyone can do something to make the world a better place, and so he shares what his father told him: “If you ever think you are too small to make a difference, try sleeping in a room with a mosquito.”
Born in the Democratic Republic of Congo, Michel Chikwanine has experienced civil war, political upheaval and poverty, emerging as an individual wise beyond his years. Forced by these circumstances to leave his home country at the age of 11 as a refugee, Michel has since traveled to 35 African countries, witnessing firsthand the problems faced by the developing world, but also the beauty of the communities and people who live there.@michelchikwan

Jessica Dee Humphreys has worked with several girls' rights organizations, including Save the Children and the United Nations Development Fund for Women. She is the co-author of a number of bestselling books, including Roméo Dallaire's Waiting for First Light and They Fight Like Soldiers, They Die Like Children. Jessica is also the co-author of the award-winning CitizenKid graphic novel Child Soldier: When Boys and Girls Are Used in War, with Michel Chikwanine.

Graphic designer and children's illustrator Claudia Dávila was born in Chile and now makes her home in Toronto. She was formerly the art director of Chirp and Chickadee magazines.

Graphic in format but not detail ...The visual element gives this memoir particular immediacy for audiences who "don't understand what is happening right now, to kids just like them."—Kirkus Reviews

... an eye-opening and heartbreaking account of Chikwanine's kidnapping at the age of five.—Quill & Quire

An enlightening, accessible, and, above all, child-friendly introduction to the issue.—School Library Journal, starred review

The narration includes enough history of the Congo to give context to the personal story, while the back matter provides more information about child soldiers.—Booklist