The Thing Lenny Loves Most About Baseball (Hardcover) 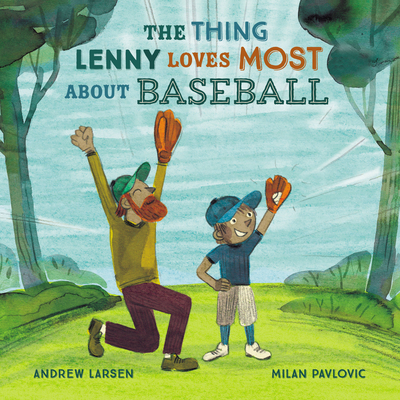 The Thing Lenny Loves Most About Baseball (Hardcover)


Not On Our Shelves—Ships in 1-5 Days
Andrew Larsen evokes the eternal hope and joy of all true baseball fans --- along with their love of facts --- in this heartwarming story about a baseball-loving boy who doesn't give up.Lenny can't get enough of baseball. He loves to play. And he loves to pore over his Big Book of Baseball Facts. He wants to be in the big leagues someday, and, he figures, the more he knows, the better his chances. The only thing is, though he tries to keep his eye on the ball as it heads his way during a game, it somehow ends up by his feet. “You just need to practice,” his dad tells him. So they practice. And practice. Lenny doesn't give up. And it pays off. Lenny makes a game-changing catch! Now he's proven he can be great some of the time. Which, according to the facts, makes him just like the greatest Hall of Famers, right?In this endearing picture book, bestselling author Andrew Larsen celebrates the love of both the game of baseball and its countless facts --- which for many fans go hand in hand. It offers a strong character-building portrait of perseverance and patience at work in skill development. It also underscores the importance of letting go of the idea of perfection. With energy and emotion in equal parts, Milan Pavlović's illustrations capture Lenny's (and baseball's) highs and lows, and his loving supportive relationship with his father.
Andrew Larsen is the acclaimed author of such books as Goodnight, Hockey Fans, A Squiggly Story, The Not-So-Faraway Adventure, In the Tree House and The Imaginary Garden. He lives in Toronto, Ontario.

Milan Pavlovi? is an illustrator and graphic artist whose drawings, illustrations, paintings and comics have been published and exhibited internationally. He teaches at OCAD University and Seneca College. He lives with his family in Toronto.