The Hidden Kingdom of Fungi: Exploring the Microscopic World in Our Forests, Homes, and Bodies (Hardcover) 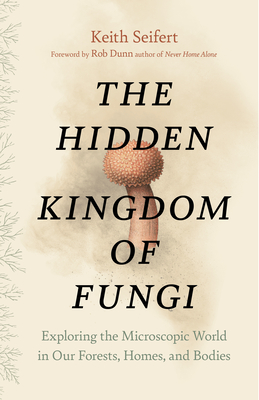 The Hidden Kingdom of Fungi: Exploring the Microscopic World in Our Forests, Homes, and Bodies (Hardcover)


On Our Shelves Now at:
"Fans of Merlin Sheldrake's Entangled Life and Suzanne Simard's Finding the Mother Tree will enjoy Seifert's latest... A perspective-shifting guide to our microfungal matrix."--Kirkus
Even though we can't always see them, fungi exist all around us. From forests and farms to food and medicine--and even our homes and bodies--fungal connections shape how we live. In this illuminating book, readers will "discover how these marvels of nature enrich (and sometimes threaten) our lives."(Peter Wohlleben, New York Times-bestselling author of The Hidden Life of Trees).
Esteemed career mycologist Keith Seifert reveals the important role that microscopic fungi, including yeasts, molds, and slimes, play in our lives, all while remaining invisible to the naked eye. Divided into sections, each one exploring a different environment where fungi thrive, The Hidden Kingdom of Fungi introduces readers to the fascinating world of mycology, with information on: Despite their many benefits, we hold a precarious relationship with fungi: fungal diseases lead to over 1 million deaths each year, and they have played a destructive role in disasters ranging from the Irish Potato Famine to possibly even the extinction of the dinosaurs. The Hidden Kingdom of Fungi urges us to better understand our relationship with fungi--and to plan our future with them in mind--while revealing their world in all its beautiful complexity.
Keith Seifert spent more than 40 years studying fungi on five continents. At Agriculture and Agri-Food Canada, he did research on microscopic fungi from farms, forests, food, and the built environment, to reduce toxins and diseases affecting plants and animals. He was president of the International Mycological Association, an executive editor of Mycologia, and associate editor of several other scientific journals. He lives near Ottawa, Canada.Dr. Rob Dunn is Professor of Applied Ecology at North Carolina State University and the author of seven books, including Delicious, Never Home Alone, and A Natural History of the Future. He's written for Scientific American, Smithsonian Magazine, and National Geographic and regularly advocates for citizen science. He lives in Raleigh, North Carolina.