A Trillion Trees: Restoring Our Forests by Trusting in Nature (Hardcover) 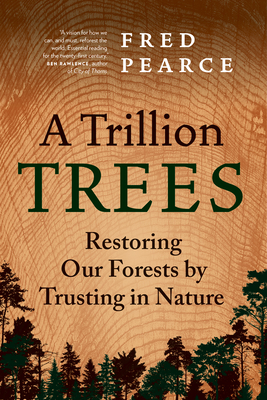 A Trillion Trees: Restoring Our Forests by Trusting in Nature (Hardcover)

"A vivid, important, and inspiring book."-- Elizabeth Kolbert, Pulitzer Prize winning author of The Sixth Extinction and Under a White Sky

"Eloquently mulls the ecological dynamics of forests as well as the social, economic, cultural, and political forces that determine their fate."--LA REVIEW OF BOOKS

A powerful book about the decline and recovery of the world's forests--with a provocative argument for their survival.

In A Trillion Trees, veteran environmental journalist Fred Pearce takes readers on a whirlwind journey through some of the most spectacular forests around the world. Along the way, he charts the extraordinary pace of forest destruction, and explores why some are beginning to recover.

With vivid, observant reporting, Pearce transports readers to the remote cloud forests of Ecuador, the remains of a forest civilization in Nigeria, a mystifying mountain peak in the middle of the Atlantic Ocean, and the boreal forests of western Canada and the United States, where devastating wildfires are linked to suppressing the natural fire cycles of forests and the maintenance practices of Indigenous peoples.

Throughout the book, Pearce interviews the people who traditionally live in forests. He speaks to Indigenous peoples in western Canada and the United States who are fighting to control their traditional forested lands and manage them according to their traditional practices. He visits and speaks with Nepalese hill dwellers, Kenyan farmers, and West African sawyers who show him that forests are as much human landscapes as they are natural paradises. The lives of humans are now imprinted in forest ecology.

At the heart of Pearce's investigationis a provocative argument: planting more trees isn't the answer to declining forests. If given room and left to their own devices, forests and the people who live in them will fight back to restore their own domain.

Fred Pearce is a freelance author and journalist based in the UK who has reported from over sixty countries. He is an environmental consultant for the New Scientist, a contributing writer for publications including the Guardian, Washington Post, and Yale Environment 360, and the author of numerous books, including The Land Grabbers and When the Rivers Run Dry.