From Oral to Written: A Celebration of Indigenous Literature in Canada, 1980-2010 (Hardcover) 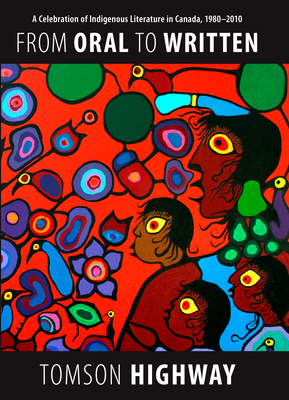 From Oral to Written: A Celebration of Indigenous Literature in Canada, 1980-2010 (Hardcover)

Aboriginal Canadians tell their own stories, about their own people, in their own voice, from their own perspective.
If as recently as forty years ago there was no recognizable body of work by Canadian writers, as recently as thirty years ago there was no Native literature in this country. Perhaps a few books had made a dent on the national consciousness: The Unjust Society by Harold Cardinal, Halfbreed by Maria Campbell, and the poetry of Pauline Johnson and even Louis Riel. Now, three decades later, Native people have a literature that paints them in colours that are psychologically complex and sophisticated. They have a literature that validates their existence, that gives them dignity, that tells them that they and their culture, their ideas, their languages, are important if not downright essential to the long-term survival of the planet.

Tomson Highway's From Oral to Written is a study of Native literature published in Canada between 1980 and 2010, a catalogue of amazing books that sparked the embers of a dormant voice. In the early 1980s, that voice rose up to overcome the major obstacle Native people have as writers: they are not able to write in their own Native languages, but have to write in the languages of the colonizer, languages that simply cannot capture the magic of Native mythology, the wild insanity of Trickster thinking. From Oral to Written is the story of the Native literary tradition, written - in multiple Aboriginal languages, in French, and in English - by a brave, committed, hard-working, and inspired community of exceptional individuals - from the Haida Nation on Haida Gwaii to the Mi'kmaq of Nova Scotia's Cape Breton Island. Leading Aboriginal author Tomson Highway surveys the first wave of Native writers published in Canada, highlighting the most gifted authors and the best stories they have told, offering non-Native readers access to reconciliation and understanding, and at the same time engendering among Native readers pride in a stellar body of work.
Tomson Highway: Tomson Highway is a writer from northern Manitoba. His best-known works are the plays The Rez Sisters, Dry Lips Oughta Move to Kapuskasing, Rose, Ernestine Shuswap Gets Her Trout, and The (Post) Mistress, as well as the best-selling novel Kiss of the Fur Queen. He writes in three languages: Cree (his mother tongue), French, and English. As a classically trained pianist (who also writes music), he has studied with some of the finest teachers in Canada, most notably William Aide and Anton Kuerti.