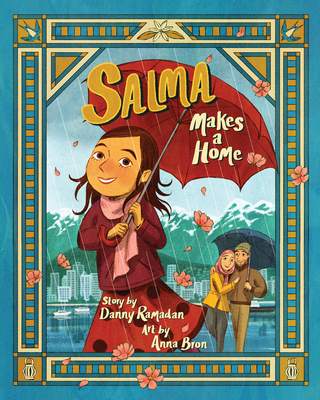 Charming, creative Salma takes on big feelings with even bigger ideas as she navigates life in a new country, Syrian identity, family changes and new friendships in this engaging and heartfelt early chapter book series.

After a year, eleven months, and six days apart, Salma's dad is finally joining her family in their new home. Salma is so happy to see her baba-but she's also worried. What if he misses Syria so much that he leaves them again? She throws herself into showing him around the city and helping him learn English, but as Baba shares memories of Damascus Salma starts to realize how much she misses Syria, too. Can Salma make space in her heart for two homes? And can Baba?

DANNY RAMADAN is an award-winning Syrian-Canadian author, activist, and public speaker. His work as an activist has helped provide a safe passage to dozens of Syrian LGBTQ+ refugees to Canada. He is the author of two novels for adults, The Clothesline Swing and The Foghorn Echoes, and a forthcoming memoir, Crooked Teeth. Danny lives in Vancouver, British Columbia. ANNA BRON studied traditional animation at Sheridan College. She illustrated the award-winning picture book Salma the Syrian Chef and the middle-grade novel Harvey and the Extraordinary. She has animated, designed, and directed commercials and short films. She lives in Vancouver, British Columbia.