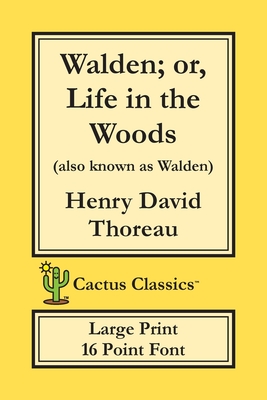 WALDEN; OR, LIFE IN THE WOODS
by Henry David Thoreau

ABOUT THE BOOK AND AUTHOR

In this book, Thoreau describes his experiences and reflections on simple living in natural surroundings. Thoreau stayed in a cabin at Walden Pond near Concord, Massachusetts for two years, two months and two days. The book condenses this period into one year and uses the passage of four seasons to symbolize human development.

Thoreau published many works over his life. Two of his best known works are "Walden; or, Life in the Woods" and "On the Duty of Civil Disobedience".

Henry David Thoreau was a prolific writer. Some of his works are published under the Cactus Classics imprint of Cactus Publishing Inc.

We regularly add new Large Print Books to our collection.