We, the Others: Allophones, Immigrants, and Belonging in Canada (Paperback) 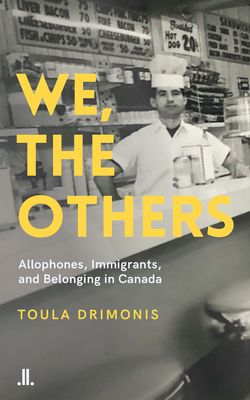 We, the Others: Allophones, Immigrants, and Belonging in Canada (Paperback)

Ungrateful, opportunistic, moochers, dangerous, incompatible with our values and our way of life?
Every immigrant demographic has heard these descriptors at some point in their migration history. We, the Others takes a contemporary look at the xenophobia, ethno-nationalism, and fear of the other that leads to discrimination and the belief that immigration is a polluting force.
Rooted in the author's personal family history as the second-generation daughter of Greek immigrants, and from her research as a journalist and columnist covering identity politics and social issues in Quebec and Canada for the past 20 years, Drimonis courageously tackles this country's history and practices, divisive legislation like Bill 21, and various nationalist movements that have influenced policy. We, the Others is a poignant look at inter-generational struggles, conflicting loyalties and heartfelt questions of belonging.

Toula Drimonis is a Montreal-based opinion columnist, writer and news producer. A former news director for TC Media, she has reported and written on politics, social justice, and women's issues for national and international publications. She has worked in television, radio, and print in all three of her languages, and has appeared on TV as both panelist and contributor to English and French-language current-affairs and cultural news shows.