I Was Never Here: My True Canadian Spy Story of Coffees, Code Names, and Covert Operations in the Age of Terrorism (Hardcover) 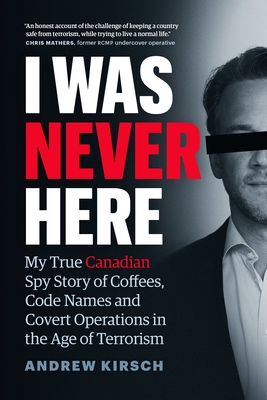 I Was Never Here: My True Canadian Spy Story of Coffees, Code Names, and Covert Operations in the Age of Terrorism (Hardcover)

An ex-spy lifts the lid on life in the secret service
A Globe and Mail and Toronto Star bestseller!

Andrew Kirsch didn’t grow up watching spy movies, or dreaming about being a real-life James Bond. He was hardly aware that Canada even had its own intelligence service—let alone knew what its officers did. But when a terrorist attack occurred near the office of his financial services job, all of a sudden fighting terrorism meant a lot more to him than the markets. Within 18 months he had landed a job with the Canadian Security Intelligence Service (CSIS)—where he spent the next decade of his life.

In I Was Never Here, Kirsch (now an in-demand security consultant) spills the secrets of what life as an intelligence officer is really like, and dispels a few myths along the way. With humour, honesty, and candour, Kirsch shares his on-the-ground experience (or as much of it as he’s allowed to) of becoming a member of CSIS: from his vetting and training, to his initial desk job as a policy analyst, to his rise up the ranks to leading covert special operations missions. If you’ve ever wondered whether spies can have real dating lives, how they handle family responsibilities, or how they come up with cover stories or aliases, you’re in luck.

From the time he tried to get the code names “Burgundy” and “Anchorman” assigned to human sources (with no luck), to the night a covert operation was almost thwarted by a flyer delivery man, Kirsch takes you behind the scenes with an authentic view of Canada’s spy agency, and the intricate intelligence-sharing apparatus that works day and night to keep us safe. I Was Never Here is also a testament to one man’s drive to serve his country, and the sacrifices, big and small, that he made along the way.

Andrew Kirsch served as an intelligence officer with the Canadian Security Intelligence Service (CSIS) for just under a decade. He held roles as a policy analyst and a field investigator, ultimately leading the special operations security team running covert warranted operations. Today, Kirsch runs a security consulting firm, assisting organizations and individuals identify threats and vulnerabilities and implement strategies to mitigate their risk. He was appointed to the Ontario Expert Panel on Cyber Security in 2020, advising the government on strengthening cyber security practices in the broader public sector. He is a public speaker and trainer on issues of national and cyber security. He lives in Toronto with his wife and two young sons.