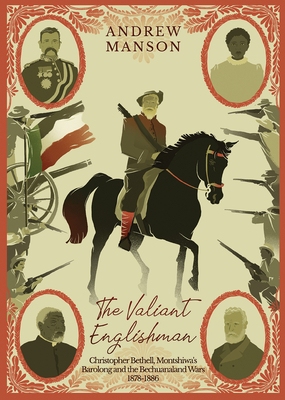 
Special Order—Subject to Availability
The book has been described as “ground-breaking,” the only comparable publication being that of the historian J. Agar-Hamilton’s The Road to the North, published in 1937. This book describes the career of an English aristocrat, Christopher Bethell, who arrives in southern Africa in 1878 as the classic “remittance” man, despatched to the colonies to avoid a scandal at home. Bethell, an intelligence officer and later, a border agent, is the protagonist who facilitated the acquisition of arms for Montshiwa's Ratshidi-Barolong to resist the depredations of freebooters, mercenaries based mostly in the Transvaal. In his alliance with Kgosi Montshiwa Tawana, Bethell identifies with Kgosi Montshiwa’s struggle to maintain political independence and economic security. The alliance was further cemented by Bethell’s marriage to a Morolong woman Tepo Boapile—an unusual occurrence in nineteenth century southern Africa. Surrounded by aggressive freebooters from across their eastern border with the Transvaal and the ambiguous forces of colonial advancement from the Cape colony and Britain, Montshiwa and Bethell form an unlikely but enduring relationship aimed at safeguarding Rolong interests.
Andrew Manson: Research Fellow at Unisa. Previously he was a Research Professor in the Faculty of Human and Social Sciences, (North West University).