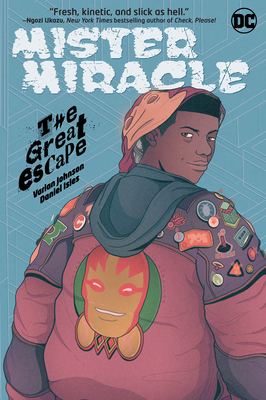 
In Stock—Click for Locations
A modern YA reimagining of the iconic Jack Kirby characters that explores identity, trauma, and the sacrifices it takes to be a hero.

From acclaimed author Varian Johnson (The Parker Inheritance) and popular sci-fi artist Daniel Isles, a.k.a. DirtyRobot, comes the story of an escape plan that will take a miracle to pull off. Luckily for Scott Free, everyone calls him MISTER MIRACLE! Okay, no one calls him that…yet.

Once Scott pulls off his foolproof plan and becomes the first person to escape the fiery pits of the planet Apokolips, he’s sure to be considered one of the greatest superheroes of all time…at least among his friends. The only problem is: his plan never involved falling in love with the head of the Female Furies, Big Barda––the one person tasked with ensuring he never escapes.
Varian Johnson is the author of several novels for children and young adults, including The Parker Inheritance, which won both Coretta Scott King Author Honor and Boston Globe/Horn Book Honor awards; The Great Greene Heist, an ALA Notable Children’s Book and Kirkus Reviews Best Book; and the graphic novel Twins, illustrated by Shannon Wright, an NPR Best Book. Originally from Florence, South Carolina, he received an MFA in writing for children and young adults from Vermont College of Fine Arts and is honored to now be a member of the faculty. Varian currently lives outside of Austin, Texas with his family.


Daniel Isles is a professional artist committed to artistic practice, observation, themes, and expression to create entire worlds of his own. His unique illustration style has been used in many industries including fashion, music, authorship, and technology. He has worked and collaborated with Apple, DC Comics, SEGA, Mighty Jaxx, Kidrobot, Timberland, and Owsla.  Mister Miracle: The Great Escape is his first full-length graphic novel.