The Flintstones The Deluxe Edition (Hardcover) 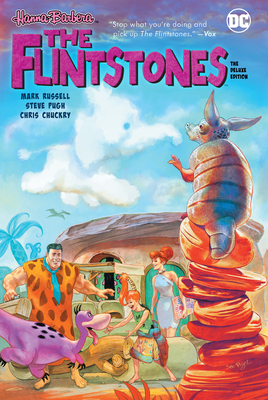 The Flintstones The Deluxe Edition (Hardcover)


Not On Our Shelves—Ships in 1-5 Days
Mark Russell's critically acclaimed—and uniquely modern—take on Hanna-Barbera's most famous stone-age family returns in a new Deluxe Edition hardcover collection of the entire prehistoric saga!

Welcome to Bedrock, where Paleolithic humans head to dinner for a taste of artisanal mammoth after shopping at Neandertall & Big Men's Clothing, where Wilma shows her modern art, and where, if you take a plane, you could end up sitting on the literal tail section. It’s Fred, Wilma, Pebbles, Dino, Barney, Betty and Bamm-Bamm as you've never seen them before!


The Flintstones garnered significant critical acclaim for its modern take on the iconic Hanna-Barbera prime-time animated series. This darkly hilarious title casts an acerbic eye on issues like consumerism, religion, politics, and relationships that's both distinctly 21st century and uniquely the Flintstones!

The critically acclaimed creative team of Mark Russell (Prez) and Steve Pugh (Animal Man) turned a beloved classic cartoon into a modern graphic novel masterpiece, and the entire 12-part story is collected in this Deluxe Edition hardcover—along with Booster Gold/The Flintstones Special #1, where DC’s time-traveling hero meets Fred and Barney!
This volume collects The Flintstones #1-12 and Booster Gold/The Flintstones Special #1.
Mark Russell is an American author, best known for his satirical graphic novel GOD IS DISAPPOINTED IN YOU, an irreverent retelling of the Bible. He is also the writer of PREZ and THE FLINTSTONES for DC Comics.