The Democratic Republic of Congo: Between Hope and Despair (Paperback) 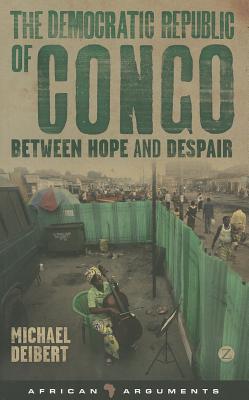 The Democratic Republic of Congo: Between Hope and Despair (Paperback)


Not On Our Shelves—Ships in 1-5 Days
Over the past two decades, the Democratic Republic of Congo has been at the centre of the deadliest series of conflicts since the Second World War, and now hosts the largest United Nations peacekeeping mission in the world. In this compelling book, acclaimed journalist Michael Deibert paints a picture of a nation in flux, inching towards peace but at the same time solidifying into another era of authoritarian rule under its enigmatic president, Joseph Kabila.

Featuring a wealth of first-hand interviews and secondary sources, the narrative travels from war-torn villages in the country's east to the chaotic, pulsing capital of Kinshasa in order to bring us the voices of the Congolese - from impoverished gold prospectors and market women to government officials - as it explores the complicated political, ethnic and economic geography of this tattered land. A must-read for anyone interested in contemporary Africa, The Democratic Republic of Congo: Between, Hope and Despair sheds new light on this sprawling and often misunderstood country that has become iconic both for its great potential and dashed hopes.
Michael Deibert is an author and journalist, whose writing has appeared in the Washington Post, Guardian, and Wall Street Journal, among other publications. He is also the author of Notes from the Last Testament: The Struggle for Haiti.

'In this remarkable tour de force of reporting, analysis, historical inquiry, and personal experience, Michael Deibert delivers the story of Congo's bloody recent history in unflinching, often bitingly acerbic prose, setting forth in the clearest terms the causes, perpetrators, and disastrous effects of the seemingly endless Congo wars. Anyone searching for a genuine way forward for Congo needs to read this book.'

'Nothing short of a tour de force of excruciating yet compassionate clarity through the political history and unspeakable violence and suffering of civilians in the lands of the Congo, this book is mandatory reading for anyone interested in building lasting peace in the heart of Africa. International donors who support governance and development in the DRC should pay close attention to Michael Deibert's compelling account.'

'This exhaustively researched history of Congo takes us from the dark days of Belgian conquest and tyranny to modern day atrocities carried out by warring militias and their legions of child soldiers. The promise driving the madness: abundant natural resources, from gold to diamonds to tantalum. Deibert lays bare complexities of power and he names names, not only those of the Congolese but also of world leaders who've either turned a blind eye to or directly fomented the misery of the Congolese people.'

-Gerry Hadden, author of Never The Hope Itself: Love and Ghosts in Latin America and Haiti

'Michael Deibert restores balance to analysis on the Congo with a holistic view grounded in history and the sociopolitical dynamics at play in the nation. A must-read book to understand the complexity of the crisis in the Congo.'

- Kambale Musavuli, Congolese human rights activist and spokesperson for the Friends of the Congo, Washington, DC

'Michael Deibert's work is the very model of what strong independent journalism can accomplish. His Congo book is no ordinary achievement. It bulges with both the grand sweep of history and a rich variety of voices gathered through enterprising, on the ground reporting.'

-Howard W. French, author of China's Second Continent: How a Million Migrants are Building a New Empire in Africa, and Associate Professor at Columbia University Graduate School of Journalism

'Michael Deibert has connected the thousands of threads linking the Democratic Republic of Congo's conflicts in a way that allows us to see the tattered fabric of this tragic country. Deibert writes with verve, clarity, passion, and obvious empathy for all of the peoples of the Great Lakes region, and his understanding of the regional and global contexts of the Congo wars is outstanding. His story-telling ability is unsurpassed, and even veteran observers of the region will be grateful for his marvelously distilled synthesis of the ordeals Congo has endured over the past 20 years.'

- John F. Clark, author of The Failure of Democracy in the Republic of Congo (2008)

'A comprehensive first-rate account of the tragedy of Congo DR: the human suffering, rape and plunder of its immense mineral wealth. Riveting and brutally honest'