The Djinn Falls in Love and Other Stories (Paperback) 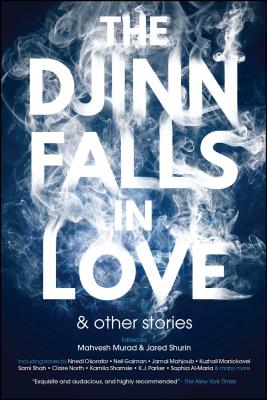 The Djinn Falls in Love and Other Stories (Paperback)


Special Order—Subject to Availability
A fascinating collection of new and classic tales of the fearsome Djinn, from bestselling, award-winning and breakthrough international writers.

Imagine a world filled with fierce, fiery beings, hiding in our shadows, in our dreams, under our skins. Eavesdropping and exploring; savaging our bodies, saving our souls. They are monsters, saviours, victims, childhood friends. Some have called them genies: these are the Djinn.And they are everywhere. On street corners, behind the wheel of a taxi, in the chorus, between the pages of books. Every language has a word for them. Every culture knows their traditions. Every religion, every history has them hiding in their dark places.

There is no part of the world that does not know them. They are the Djinn. They are among us.

After a spectacularly unsuccessful career as a lawyer, K J Parker started writing for a living in 1995. When not gazing helplessly at a blank screen, KJ rears pedigree Oxford Sandy & Black pigs, chops down trees and makes things out of wood, metal and cloth. He won the World Fantasy Award for best novella two years running, and currently averages 92.8 in the SSBSA summer league. He also writes under the name Tom Holt.

Mahvesh Murad is an editor, critic and voice artist from Karachi, Pakistan. She is the editor of the award-winning Apex Book of World SF 4, host of the interview podcast Midnight in Karachi for Tor.com and the voice of many international radio and TV commercials, as well as multiple short stories.

Jared Shurin has edited or co-edited 12 anthologies in partnership with Tate Britain, the Egypt Exploration Society, the Royal Observatory and others. He has been a finalist for the British Science Fiction and Hugo Awards, and twice won the British Fantasy Award. Jared was the editor of the award-winning geek culture website Pornokitsch.
"Exquisite and audacious, and highly recommended." -- The New York Times
— The New York Times

"A treasure chest of literally wonderful and marvelous stories, with a kind of richness that fantasy only rarely achieves." -- Tim Powers
— Tim Powerrs

"Opens quietly with an intense, thrumming poem from Egyptian poet Hermes, and then ignites like the creature it profiles... a rich and illuminating cultural experience." -- Washington Post
— The Washington Post

"The sheer variation of interpretation is what makes this a superior collection, as well as, of course, the superior writing." -- BookRiot
— BookRiot

"A sparkling array of talent and imagination" -- SFX
— SFX Magazine

"A superb collection of superior stories by some of my favorite writers. This is the must-have anthology of the year." -- Lavie Tidhar
— Lavie Tidhar

"Readers looking for stories set in a variety of locales (even outer space) and arrayed over various cultures and religions will find much to like." -- Publishers Weekly
— Publishers Weekly

"A range of terrific stories in a variety of styles, all of them effective... Fall in love with djinn! Read this book." -- Geek Syndicate
— Geek Syndicate