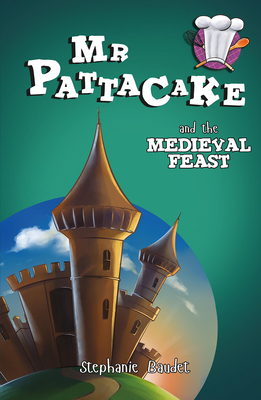 This is book number 5 in the MR Pattacake series.

Mr Pattacake thinks the medieval fun day is going to be perfect. He's made all sorts of weird and wonderful dishes- what could possibly go wrong? But, as usual, nothing ever goes smoothly for Mr Pattacake. He finds himself in a mess when problems strike and a ride on a runaway horse has Mr Pattacake clinging on for dear life. Will he manage to save the day this time?

The Mr Pattacake series tells the stories of an eccentric chef and his cat, Treacle, who are always getting themselves into sticky situations. Readers aged 5+ will love following this world of food and adventure.

Stephanie Baudet ================ Stephanie was born in England before emigrating to Australia - and later New Zealand - with her family, where she trained as a nurse. Whilst back in England on holiday, she met and married her husband, had a daughter and settled down. Stephanie's lifelong interest in writing became more serious when her first children's book, Avalanche, was published in the 1980s. Since then, she has had around forty children's books published, and has also published an historical novella for adults.