Thorfinn and the Rotten Scots (Paperback) 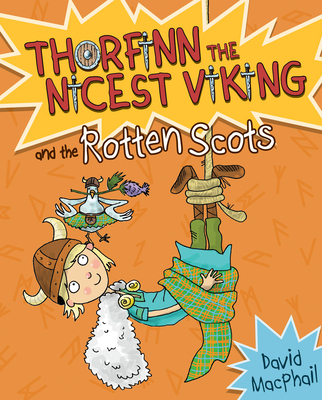 Thorfinn and the Rotten Scots (Paperback)

Prepare yourself for the wrath of the Norsemen That is, if you don't mind and it's not too inconvenient...

Everyone knows Vikings are ruthless barbarians whose idea of a good time involves pillaging, plundering and feasting. But Thorfinn is no ordinary Viking He is always polite and happily offers to wash the dirty dishes. Too bad his dad is Harald the Skull-Splitter, Village Chief and the roughest and toughest Viking of them all.

On a raiding voyage to Scotland, Thorfinn and his friends Velda and Oswald are kidnapped by Ranald MacRanald, chieftain of the Clan MacRanald. Little does Ranald he know that his methods of 'torture' (making the Nicest Viking sew with the women and clean the castle from top to bottom) are actually Thorfinn's idea of a brilliant Scottish holiday Will Chief Harald the Skull-Splitter come to his son's 'rescue' before Thorfinn drives the Rotten Scots crazy with politeness?

Thorfinn the Nicest Viking is a funny, illustrated, action-packed series for young readers which bridges the gap between Horrid Henry and Diary of a Wimpy Kid, set in a world where manners mean nothing and politeness is pointless

David MacPhail left home at eighteen to travel the world and have adventures. After working as a chicken wrangler, a ghost-tour guide and a waiter on a tropical island, he now has the sensible job of writing about yetis and Vikings. At home in Perthshire, Scotland, he exists on a diet of cream buns and zombie movies. David is also the author of Yeti on the Loose and the Thorfinn the Nicest Viking series. Richard Morgan was born and raised by goblins on the Yorkshire moors. He has painted backgrounds for Disney TV and now writes and illustrates children's books. He lives in Cambridge, England, and has a family of goblins of his own.