The Rhodesian African Rifles: The Growth and Adaptation of a Multicultural Regiment Through the Rhodesian Bush War, 1965-1980 (Art of War Papers Ser (Paperback) 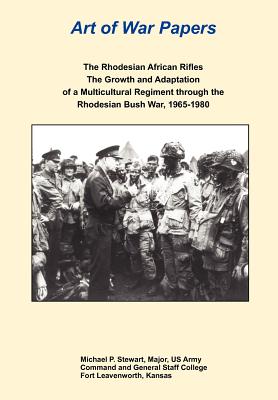 The Rhodesian African Rifles: The Growth and Adaptation of a Multicultural Regiment Through the Rhodesian Bush War, 1965-1980 (Art of War Papers Ser (Paperback)


Not On Our Shelves—Ships in 1-5 Days
(This book cannot be returned.)
The Rhodesian African Rifles overcame profoundly divisive racist and tribal differences among its members because a transcendent "regimental culture" superseded the disparate cultures of its individual soldiers and officers. The RAR's culture grew around the traditions of the British regimental system, after which the RAR was patterned. The soldiers of the RAR, regardless of racial or tribal background, identified themselves first as soldiers and members of the regiment, before their individual race and tribe. Regimental history and traditions, as well as shared hardships on deployments and training were mechanisms that forced officers and soldiers to see past differences. The RAR is remarkable because these bonds stayed true through to the end of the war, through incredible pressure on black Rhodesians to succumb to the black nationalist groups and cast off a government that was portrayed to them as oppressive, racist and hateful. Through the end of the Bush War, 1965-1980, RAR soldiers remained loyal and steadfast to their regiment, and that must be their legacy. In the end, the values of the government were irrelevant. It was the regiment that drew these men in, and their loyalty was more to their comrades and their heritage than to any particular government or cause.