Why Materialism Is Baloney: How True Skeptics Know There Is No Death and Fathom Answers to Life, the Universe and Everything (Paperback) 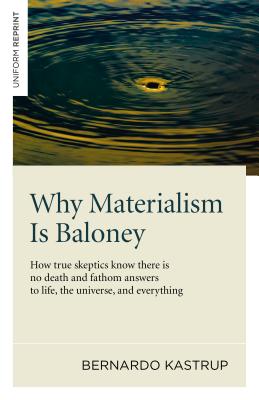 Why Materialism Is Baloney: How True Skeptics Know There Is No Death and Fathom Answers to Life, the Universe and Everything (Paperback)


Not On Our Shelves—Ships in 1-5 Days
The present framing of the cultural debate in terms of materialism versus religion has allowed materialism to go unchallenged as the only rationally-viable metaphysics. This book seeks to change this. It uncovers the absurd implications of materialism and then, uniquely, presents a hard-nosed non-materialist metaphysics substantiated by skepticism, hard empirical evidence, and clear logical argumentation. It lays out a coherent framework upon which one can interpret and make sense of every natural phenomenon and physical law, as well as the modalities of human consciousness, without materialist assumptions. According to this framework, the brain is merely the image of a self-localization process of mind, analogously to how a whirlpool is the image of a self-localization process of water. The brain doesn't generate mind in the same way that a whirlpool doesn't generate water. It is the brain that is in mind, not mind in the brain. Physical death is merely a de-clenching of awareness. The book closes with a series of educated speculations regarding the afterlife, psychic phenomena, and other related subjects.
Bernardo Kastrup has a Ph.D. in philosophy and another in computer engineering. He has been a scientist in some of the world's foremost scientific laboratories. His main interests are metaphysics and philosophy of mind.