The First Ashanti War 1823-31: The Conflict Between the British Army and the Natives of West Africa-Narrative of the Ashantee War with a View of the (Paperback) 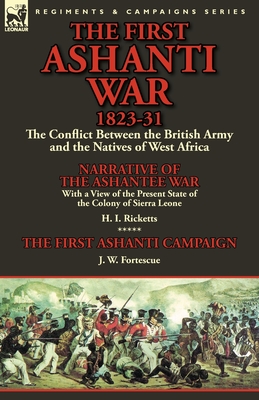 The First Ashanti War 1823-31: The Conflict Between the British Army and the Natives of West Africa-Narrative of the Ashantee War with a View of the (Paperback)


Not On Our Shelves—Ships in 1-5 Days
(This book cannot be returned.)
The British Empire's open West African sore As the 19th century progressed the inexorable expansion of the British Empire gained momentum across the globe. Imperial ambitions invariably resulted in British naval and military forces coming into conflict with indigenous peoples, who understandably resented intrusions into their territories and traditional ways of life. How problematic the resulting conflict proved to be for the British depended on two factors-the martial abilities of their opponents and the difficulty of the terrain for military operations. The more troublesome these factors were, particularly when combined, then the more likely it was that there would be no easy final outcome. It is significant that the first hostile engagements against the Ashanti tribe, of the West African Gold Coast region, broke out in 1806 and conflict with the British continued throughout the century-in at least five wars-until the final Ashanti defeat in 1900 and the incorporation of Ashanti territories into the Gold Coast colony in 1902. This book concentrates on the First Anglo-Ashanti War of 1823-31. It followed a pattern for British imperial wars with captured officers beheaded, bitter fighting in dense jungle with no favourable outcome guaranteed, and tropical diseases which reduced British numbers far more effectively than open battle ever could. The initial part in this Leonaur book is a first hand account of the conflict based on personal experience, and this is followed by a brief overview of the campaign, that adds perspective, by the eminent historian of the British Army, Sir John Fortescue.
Leonaur editions are newly typeset and are not facsimiles; each title is available in softcover and hardback with dustjacket.