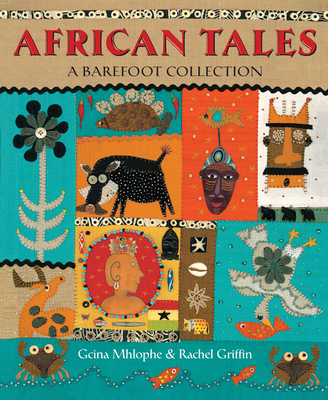 
Not On Our Shelves—Ships in 1-5 Days
This anthology includes eight traditional tales from all over Africa. Sumptuous hand-sewn collage artwork decorated with African beads adorns these unforgettable tales of bravery, wisdom, wit and heroic deeds.
Gcina Mhlophe has been writing and performing for over twenty years and conducts storytelling workshops around the world. Gcina has received many awards, including the Fringe First award, the Josef Jefferson award, an OBIE (Off-Broadway Theatre Award) and two honorary degrees in literature. She founded the Literacy Promotion Road Show, which travels to schools all over South Africa to set up libraries. Gcina lives in Durban, South Africa with her husband, daughter and two cats. Rachel Griffin's artwork has been recognized all over the world for its ornate detail, which blends fabrics, beads, stamps and other odds and ends. Her passion for collecting helps her to accumulate a vast range of items that she can incorporate into her work. Her work has appeared in numerous exhibitions and galleries, including her own one woman exhibition at London's Barbican Centre. She has illustrated several well-loved books for Barefoot. She currently lives in Bristol, England with her husband, Rob, and daughter, Betzy.