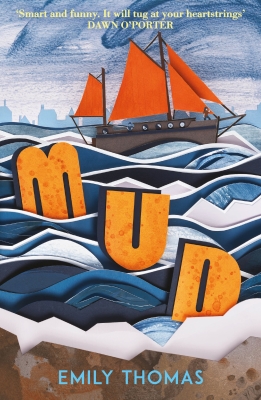 MUD STICKS. AND SO DO LITERARY HEROINES
An achingly funny, touching story for anyone who has been thrown in at the deep end.

‘Smart and funny. It will tug at your heartstrings’ Dawn O’Porter

It's 1979, and thirteen-year-old Lydia has no idea how she'll cope when her dad announces that the family has to sell up and move onto a Thames sailing barge in Essex. With his girlfriend. And her three kids.
Between trying to keep her clothes dry in a leaky cabin, disastrous hair-dye attempts, awkward encounters with local boys, and coping with her suddenly enormous and troublesome family, Lydia fears she'll sink rather than swim . . .
At turns heartbreaking and uplifting, through Lydia's innocent and perceptive voice we find out that while the mud may stick, the tide can turn - and in unexpected and joyful ways.

Emily Thomas was born in London, and has lived there most of her life – except between the ages of 13 and 18 when she lived in Maldon in Essex on board a Thames Sailing Barge, with her family of seven assorted siblings and stepsiblings and two warring cats. Emily also works as an editor of many different kinds of books, including children’s and young adult fiction. She now lives in Brixton, with no pets and a lot of books.
"Smart and funny. It will tug at your heartstrings" - Dawn O'Porter -

"This delectable novel... Historically evocative and full of amusing thoughts, it scoots along with wind in its sails." - Nicolette Jones - Sunday Times, Children's Book of the Week

"...a very accomplished debut that, despite being set in 1979, will resonate powerfully with today's teenagers who struggle with adolescent insecurities and fractured families." - Sally Morris - Daily Mail - Best Books for Christmas 2018

"Poignant tale of a teenage diarist and her flaky father.... Lydia's voice - a mixture of protest and reconciliation - is the book's genius." - - Daily Telegraph

"Mud is a dark comedy of family implosion and Thomas's evocation of wry, romantic adolescence is impeccable." - Rowan Pelling - i News

"A searing and touching portrait of a family overwhelmed by grief under the shadows of alcoholism and emotional neglect. A remarkably assured debut, based on the author's own life." - Sally Morris - Daily Mail