Thumbelina: The Culture and Technology of Millennials (Hardcover) 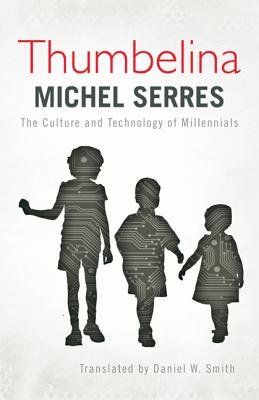 Thumbelina: The Culture and Technology of Millennials (Hardcover)


Not On Our Shelves—Ships in 1-5 Days
The title of this timely and thought-provoking book, a French bestseller, refers to schoolgirls sending text messages to their friends on their smart phones. Michel Serres, one of France's most important living intellectuals, uses this image to get at something far broader: that humans are formed and shaped by technologies, and that with the advent of computers, smart phones, and the Internet, a new human is being born. These new humans beings are our children--thumbelina (petite poucette) and tom thumb (petit poucet)--but technologies have been changing so fast that parents scarcely know their children. Serres documents this cultural revolution, arguing that there have been several similar revolutions in the past: from oral cultures to cultures focused on reading and writing; the advent of the printing press; and now the complex changes brought about by the new information technologies--changes that are taking place at an accelerated pace and that affect us all.
Michel Serres is a professor in the history of science at Stanford University and a member of the Academie Francaise. A renowned and popular philosopher and one of France's leading intellectuals, he is the author of a number of works already translated into English, including Variations on the Body, The Parasite, The Five Senses and Malfeasance: Appropriation Through Pollution? Daniel W. Smith is associate professor of philosophy at Purdue University. He is the author of Essays on Deleuze and translator of several works, including Deleuze's Francis Bacon.